This week’s Collegian Athletes of the Week come from the Kansas State volleyball and men’s golf teams.

The Big 12 Conference named Kansas State volleyball’s freshman opposite Gloria Mutiri Rookie of the Week last week. That, coupled with her performance in last week’s match against Texas, makes her this week’s female Collegian Athlete of the Week.

“I thought she got warmer as she went,” Fritz said to K-State Sports. “Early, I didn’t think she was as productive as she has been up to this point. But she started heating up late when we needed her the most.”

Mutiri had 14 kills in the match, six of those came in the fifth set with everything on the line. She is currently second on the team in kills this season with 133, an average 2.96 per set.

The Wildcats will take on West Virginia on the road this Wednesday night at 5 p.m.

As for the male Collegian Athlete of the Week, it goes to K-State senior golfer Roland Massimino for his 27th place effort at the Maui Jim Intercollegiate in Arizona over the weekend.

Massimino shot an even-par 70 on Sunday. That provided him with a two-under par score in his first tournament of the season.

“I was really proud of Roland this week,” Robbins told K-State Sports. “He missed out on qualifying (for the first tournament) but got an opportunity when Kyle (Vance) got injured, and he made the most of it.”

As a team, K-State took 14th place, shooting 15 over in the tournament. Georgia Tech ended up taking the crown.

Next up for the men’s golf squad is the Big 12 Match Play Championship, which will take place Oct. 12-14 in Houston, Texas. 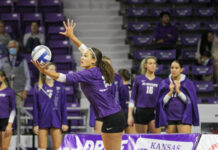