Home News Campus The Business Building’s stock ticker runs nonstop, but how does it work?

From the sidewalks of Manhattan Avenue, the LED lights in the College of Business shine through the large windows, the ticker displaying stock market information all through the night.

Stacy Kovar, associate dean for academic administration, said the eye-catching machine has multiple purposes. One of the reasons, Kovar said, is simply because it’s a stock ticker similar to the one someone would see at the New York Stock Exchange.

“The ticker reflects who we are,” Kovar said. “It gives students the opportunity to be aware of stock prices. We can also put messages on there. We’ve specialized it so if a company that hires a lot of our graduates is publicly traded, then their ticker will appear on the stock price. It exposes people to the companies that we hire.”

Galen Bunning, director of development in the College of Business Administration, said the board is a mode of “moving information around.”

“There are a lot of things people love about the ticker,” Bunning said. “One, it’s prominent. It’s definitely a signature piece of the building. It’s eye-catching. It’s a talking point.”

President Myers has a new purple ride. Have you hitched a ride yet?

Though the ticker provides information specific to the same groups of companies regularly, it isn’t paid for through advertising or other outside sponsorships, Kovar said. The feed is purchased through an outside company called RISE, which sells a standard stock feed that the school then customizes to fit their specific needs and wants.

The ticker is on 24/7, but Gary Weishaar, engineer in controls and energy management, said the technology isn’t necessarily racking up high energy costs.

“The ticker is a LED type display, so it’s a much lower usage than what you might think,” Weishaar said. 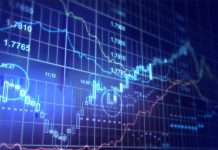