“To Kill a Mockingbird” by Harper Lee is one of the most frequently challenged books in the U.S. It has consistently been on the American Library Association’s top ten challenged books for years. Even though the the book was published in 1964, it still causes controversy to this day.

“To Kill a Mockingbird” is set in the 1930s in the small town of Maycomb, Alabama. The book is told from Scout Finch’s perspective. Her father, Atticus Finch, is an attorney trying to prove the innocence of Tom Robinson, a black man falsely accused of rape.

The book itself is challenged for sexuality and rape topics, violence and use of the N-word, which is why many people believe the book is not suitable for young readers.

Many school districts in the nation have the book on their reading lists for students. I read this book my sophomore year of high school, and I remember my teacher telling us that this was a controversial book before we read it. We still discussed it in class and everyone thoroughly enjoyed the book.

Back in 2017, a school district in Biloxi, Mississippi, pulled the book from the eighth grade reading list. Some parents even replied to the school district saying that their children are tough enough to read the book despite the topics the book contains.

This year alone, a school in Minnesota banned the book, as well as “Adventures of Huckleberry Finn” by Mark Twain, for using racial slurs.

The problems is, this book is still relevant to this day. Schools tend to stray away from talking about the topics of sexuality and racial issues, saying that it’s not appropriate for students. I feel like we need to stress these topics so students can learn, but schools would rather ban the book.

Sydney Borstelman is a sophomore in mass communications. The views and opinions expressed in this review are those of the author and do not necessarily reflect the official policy or position of the Collegian. Please send comments to opinion@kstatecollegian.com. 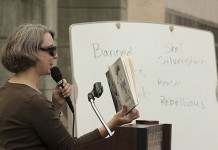