Students were full of smiles and laughs on Sunday at Jardine Apartments as they tried a different variety of yoga for the first time: goat yoga.

The outdoor event was held from 2 to 4 p.m. and served as an opportunity to put on some leggings, gather some friends together and do some exercise with friendly farm animals.

The animals were rambunctious, trying to eat clothing and jumping on participants’ backs. The goats did not follow the instructor’s cues, but that didn’t matter to those participating.

“It was a lot of fun,” Mya Masterson, senior in life sciences, said. “Probably the first and last time a goat will be climbing on me.”

The idea came from the late-night brainstorming session of a group of students that wanted to offer a unique event to Jardine residents and other K-State students.

“This is one of the coolest event Jardine has put on,” Frances Korer, senior in kinesiology, said. “I loved the experience.”

The support of Ron Wilson, owner of Lazy T Ranch, made the event possible. Wilson brought out his animals to interact with the participants.

Though goat yoga was the main attraction, it was one part of the event. There was also a petting zoo and miniature horse rides available to those who attended.

The biggest surprise for organizers was the amount of people who attended the event despite the rainy morning and chilly weather. The free event attracted Jardine residents, students and families with kids.

“It was an amazing time with a great turnout,” said event organizer Owen Michael, sophomore in animal sciences and industry. “People really seemed to enjoy goat yoga as well as the petting zoo.”

Though the event also served an outside audience, it was primarily designed as a community building opportunity for Jardine residents.

“It was a unique community event,” Jordan Eberhardy, senior in kinesiology, said. “It’s neat that Jardine could organize something like this for everyone to enjoy.” 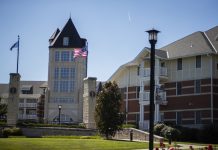 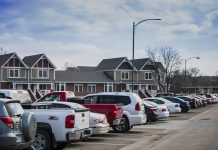