Before the winter season brings runny noses, tired bodies and a greater need for naps, students and faculty are preparing to fight off the flu with vaccines.

Within the first three days of their walk-in clinic, staff at Lafene Health Center administered 122 shots, which is 40 percent more than they did during the clinic’s first week in 2017.

“We’re pretty excited that we have that many individuals coming in,” Abby King, nursing coordinator at Lafene said.

The walk-in clinic, open almost continuously between the hours of 8:30 a.m. and 4:30 p.m. every week day. No appointments are necessary.

Last year, all the clinics administered a total of 1,644 vaccines, with an estimated 1,000 of the vaccinations going to Kansas State students. King said these numbers don’t include people who came to Lafene who received the vaccine while in a seperate care appointment.

“In last few years, we’ve started seeing flu activity towards the middle of October so we take that data and use it in our planning for the next year,” Adams said.

Nationally, trends are similar with a peak of activity between December and February. Adams said the 2017-2018 season was the worst flu season nationwide since 2009 with the CDC reporting approximately 80,000 deaths attributed to the flu and infection complications.

“[CDC] and the Advisory Committee on Immunization Practices recommends being vaccinated by the end of October to ensure adequate protection heading into peak flu season,” Adams said. “It typically takes the body about two weeks to build up a strong enough immune response to fight off the flu when someone comes in contact with the virus.”

King said the health center encourages students who receive their flu shot to share the reasons why they get vaccinated and to use #FightFluAtKSU on social media.

“We’re really trying to incentivize students to come in,” King said. “We’re giving away $10 gift cards every week to a restaurant or business here in town.”

Other locations in Manhattan give incentives as well. Katie Spradling, senior in agricultural economics, said she has taken advantage of Target’s offer since she and a roommate learned about it their freshman year.

“I got my flu shot at the CVS inside Target because they accept my insurance so I don’t have to pay, but the best part is if you get your flu shot there, they give you a $5 Target gift card,” Spradling said.

Spradling said she always seeks out the vaccine because her mom tells her she has to.

Kagan Blackwell, senior in mechanical engineering, said he returns home for his vaccination.

“I didn’t get a vaccine last year because I was procrastinating and, surprise, I got influenza,” Blackwell said.

King said health professionals are unable to predict exactly how helpful the vaccine is for this year’s flu.

“It all really depends on how well the vaccine is matched with the virus that is going to be out,” King said.

King said receiving the vaccine can really make the difference when it comes to such a potentially deadly virus.

“We always suggest everyone get vaccinated, not just for themselves, but for everyone around them such as young children and people that are immunocompromised,” King said.

Similar to Lafene, the RCHD hosts clinics for flu vaccines. The clinic, Okt-FLU-ber Fest, is the biggest outreach event of the year for the department, Adams said. 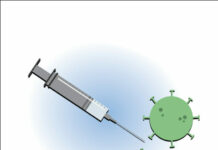