TOPEKA — It was a blustery day as President Donald Trump came to Topeka on Saturday afternoon for a rally for Kris Kobach, current Kansas secretary of state and the GOP nominee for the governor’s race this year.

Earlier Saturday, the U.S. Senate ended a month of controversy and narrowly confirmed Brett Kavanaugh to the Supreme Court in a vote largely along party lines. Democrats in the Senate had clamored for a lengthier investigation into allegations that Kavanaugh had sexually assaulted Christine Blasey Ford in the summer of 1982.

“You don’t give power to an angry left-wing mob,” Trump said. “Republicans believe in the rule of law not the rule of the mob.”

In the Nov. 6 general election for Kansas governor, Kobach will take on Democratic candidate Laura Kelly and Greg Orman who is running as an independent.

During Trump’s speech, the crowd broke into a chant blaring “USA-USA-USA.” The chant electrified the crowd as Trump thanked many Republican politicians, his most local comments made in regards to Colyer, Kobach and Steve Watkins, candidate in the 2nd Congressional District in Kansas.

Trump praised Colyer, saying that he is a “man of integrity” and “one hell of a Governor” before introducing Kobach as a friend and someone he has with worked closely.

Trump recalled a conversation that he had previously had with Kobach stating that Kobach told him, “Sir, I want to be the Governor of Kansas because I love my people.”

Kobach went on to state his beliefs on the nation’s immigration system and the security of the nation, and he explained how he wants to end sanctuary cities in Kansas, stop illegal immigrants from getting taxpayer dollars, continue to secure Kansas election laws and lower taxes for Kansas residents.

“It’s time to stand up for proven principles and constitutional rights,” Kobach said.

Before leaving the podium Kobach thanked Trump for “making America great again” and said that “we are going to make Kansas great again.”

After Kobach left, Watkins came forward to the podium praising Trump as a “fighter” and joked about “how much more he could have accomplished if he were a Kansan.”

“Kansans can do anything and here I am standing next to the leader of the free world,” Watkins said.

The general election will take place on Nov. 6 and polls will be open from 7 a.m. to 7 p.m. The deadline to register to vote in Kansas’ election is Oct. 16. The last day to request an early ballot by mail is Oct. 31. 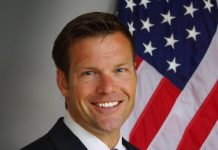