Protesters gathered around the edges of the Missouri River at the Standing Rock Indian Reservation. They were passionate—their signs and banners brightly colored and painted with powerful language. Phrases like “defend the sacred” and “we are water” peppered the loud and emotional crowds.

This was the scene during the Dakota Access Pipeline protests. The fervor and zeal of the resistance was not new for Native Americans. For years, Native Americans participated in activism across the United States.

On Monday, Kansas State hosted a discussion following a screening of the film “Warrior Women” as a part of Indigenous People’s Day.

The film tells the story of Madonna Thunder Hawk and her daughter Marcy Gilbert, both of whom are active participants in the fight for native rights. Madonna Thunder Hawk has been part of numerous movements and organizations including the Red Power Movement, the Occupation of Alcatraz and the American Indian Movement.

Many people filled the K-State Student Union Ballroom on Monday. During the screening of the film, the voices of Thunder Hawk and her daughter, as well as many others, echoed throughout the room.

The film included video clips dating back to the 1960s. It was full of color and joyful nostalgia as the women looked back on all they accomplished. The film placed emphasis on the important role women play in the fight for justice.

When the screening was over, LaVerne Bitsie-Baldwin, director of the Multicultural Engineering Program, took to the stage, tearful, recounting an experience she had at an engineering orientation.

She said when they spoke to the students, they encouraged them to talk to the women in their life because they are the ones who took care of them. Bitsie-Baldwin repeated this advice to the crowd present at the screening.

“This is my advice to all you students out there,” she said. “Definitely, call your auntie. Call your mom. Call your sister. They’ll appreciate it.”

After Bitsie-Baldwin’s remarks, the crowd asked questions and shared their comments with each other.

Audience member Dianne Barker told the crowd what she felt after watching the film. She encouraged her fellow audience memebrs to think of a landscape familiar to them.

“I think the thing that really has impressed me is that inherent connection we do have with land,” she said. “That’s a scared connection, and these people are struggling to honor and preserve and continue that sacred connection.”

Continuing the conversation: What to expect from second KSUnite

Another topic that surfaced during the short discussion involved the Manhattan High School mascot, the Indians. Audience members clapped and other expressed their gratefulness for the efforts made by Bitsie-Baldwin and her daughter as well as others to replace the mascot.

An audience member stood up to thank those directly involved in the endeavors for the mascot change which was ultimately unsuccessful.

“I went to MHS, and I’m only a sophomore at K-State but I’ve lived here my whole life,” she said. “I watched the mascot issue happen. I really appreciate those who participated, and still are, in those efforts. It can be really easy to not realize the issues.”

The screening of “Warrior Women” was only one of the events that took place for Indigenous People’s Day. Guest speakers and panels were part of the day-long effort to educate and discuss the experience of Native Americans and the ongoing fight for their rights in the United States. 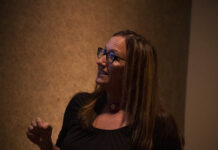