As the rain drenched Kansas State’s campus, conversations poured throughout the top level of the Union Tuesday morning. In two rounds, running from 10:00 to 11:45 a.m., facilitated sessions on topics pertaining to different facets of community led up to the second KSUnite rally.

Ronnie Grice, assistant vice president of public safety and K-State Police Department chief, led a session titled “Campus safety: Best strategies for safety both on and off campus” in the first round of breakouts in the morning.

Grice said the first key tip for safety is being aware of your surroundings. One service he talked about was the LiveSafe app.

“You can set one of your friends to track you from point A to point B,” Grice said.

The LiveSafe app allows friends to track a student’s phone at their request if they are traveling alone. The user or the watcher can contact the police through the app if an emergency or concern occurs. Users can also send pictures to the KSUPD through the app to report crimes. Grice said an example would be to report someone graffitiing a building.

Students and staff members asked questions throughout the program. One audience member asked if dialing 911 will direct them to KSUPD or the Riley County Police Department, depending on their location.

Grice said all 911 calls in the area go through the RCPD first, then can be rerouted to KSUPD’s dispatch service. He recommended students to call 785-532-6412, KSUPD’s non-emergency number, to reach the police department faster.

“Sexual assault across campus is probably one of the most underreported crimes that happens in the university setting,” Grice said. “Sometimes it’s good to have somebody to talk to, somebody to reach out to you.”

Grice wrapped up the session by showing the audience KSUPD’s active shooter training video, which informs viewers of different ways to respond to an active shooter situation using the ALICE program.

Whitney Hinmon, sophomore in accounting, said she liked all the information that was given because she likes knowing that resources that are at her disposal.

“I’m responsible for my own safety as well, even though there are service providers that are around to back me up or anything when I need assistance,” Hinmon said.

“Empowering First-Generation Student Success” was one of the 10 a.m. sessions before KSUnite meant to highlight the university’s efforts to graduate students who are first-generation college students by meeting their individual needs. This session in particular was held in cooperation with the Suder family.

Eric Suder, president and founder of the Suder Foundation, said only four percent of first generation students in the United States will actually graduate.

“They are less prepared, have a greater financial need and their success will transform generational patterns,” Suder said.

At K-State, Suder said, the four-year graduation rate of a first generation student is about 28 percent.

“We’re about leveling the playing field,” Suder said. “A person can be whatever they want to be.”

“I really love to help empower students, to get them to feel that they are excited about being here and exploring what the university has to offer,” Alison Wheatley, assistant dean of the College of Arts and Sciences, said. “It’s important to help students know that we value them.”

Emily Wright, freshman in human development, said she is a first-generation college student and chose to attend because it directly applies to her life and her college experience.

Another first-round conversation was “Free Speech, Diversity and Inclusion,” which was led by Cheryl Strecker, university general counsel, and Mirta Chavez, director of multicultural programming for the Division of Diversity and Multicultural Student Affairs. The session centered around establishing the fine line between hate speech and free speech.

Part of the conversation included the definition of laws that establish and limit free speech. They touched on topics such as racially charged hate speech and gender-specific hate speech as well as discussing movements such as the Civil Rights Movement and feminist movements, as well as covering more recent movements like the push for rights for the LGBTQ community.

At the end of the session there was a discussion period where several faculty members, including Bryan Samuel, chief diversity officer, were able to weigh in on the topic as well as giving their opinions as to what should be considered to be free speech, mainly on campus.

Wildcat Dialogues held a workshop at 11 a.m. titled “Developing Skills for Leading Courageous Conversations.” The facilitators of the workshop had participants sit in circles to have group discussions, as the point of the session was having hard conversations.

The session emphasized the importance of intercultural competence. Near the beginning of the presentation, Aliah Mestrovich Seay, co-facilitator and instructor for youth development, said competence in such fields is marked by one’s ability to adapt to differences within a community.

The organization, which hosted an event earlier in the semester, aims to help students take action in developing intercultural learning.

During the presentation they displayed the intercultural development continuum, which makes up five steps that move individuals away from a monocultural mindset. The five stages are denial, polarization, minimization, acceptance and adaptation.

During one of the group discussions, Brandon Solari, freshman in entrepreneurship, described what he thinks is a barrier from having these types of difficult conversations.

“Sometimes fear,” Solari said. “Everyone has different views on certain things. You just don’t know how other people are going to respond.”

Purple, black and gray shirt-donning students and faculty scattered throughout the Big 12 Conference room for “The Hate U Give: a Public Conversation” session.

Tara Coleman, K-State Book Network chair, began by welcoming everyone and said she hoped the session could be conversation in a big room and not feel like a lecture.

“The Hate U Give Little infants F***’s Everybody” are the words tattooed on the chest of the deceased rapper 2Pac and the inspiration for the title of the K-State Book Network’s choice for students to read. The book “The Hate U Give,” written by Angie Thomas, was the platform in the session for members to discuss race, civil discourse, social media and the power of language.

The group proceeded to talk about how bold use of language, such as 2Pac’s tattoo, brings attention and starts conversation. A member in the audience said 2Pac’s tattoo says something about society that needs to be talked about.

Led by Doris Carroll, associate professor of special education, counseling and student affairs, one of the later sessions focused on micro-aggressions and how they affect the people that are on the receiving end.

Micro-aggressions are verbal and nonverbal insults that are either consciously or unconsciously distributed in conversation that convey negative messages based on minority identity.

The session included an exercise in which the people attending paired up with those around them to discuss micro-aggressions they have experienced or maybe committed.

Carroll wrapped up the session discussing how society can pinpoint micro-aggressions and how to overcome them, including steps to confront those who commit them in a positive way. 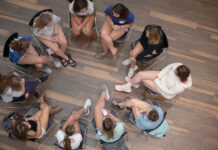