Homecoming kicked off Sunday with Pant the Chant, and the festivities continued Tuesday with the Wildcat Request Live dance competition.

Teams of paired fraternities and sororities took to the floor of Bramlage Coliseum to show off their hard work and compete for the winning homecoming spot. This year’s homecoming theme is Little Apple, Big Entertainment.

Lydia Brooks, senior in apparel and textiles marketing and homecoming chair for her sorority, said each pairing received a music artist to base their Pant the Chant routine, spirit signs, parade float and Wildcat Request Live dance around. Each homecoming pairing is made up of a sorority and one or two fraternities.

“Everyone is required to use the music from their artist; they should be incorporating something about their artist along with K-State spirit, and some good dancing,” Brooks said.

The pairings then performed a two- to three-minute dance to the Manhattan community sitting in the stands.

“This event is fun to watch, and the girls have to try out to be on their teams,” Brooks said. “It gets competitive because girls want to represent their house well.”

This year there were also performances by the K-State cheerleading squad, the Classy Cats and the Swinging Spurs, an elite swing dancing team at K-State.

“Really anyone can compete, they just have to get a group together,” said Sophia Gonzales, sophomore in business and member of the homecoming committee. “Along with the other events, like the 5K, anyone from the community can come out. They don’t have to be in a fraternity or sorority to do it.”

The competing groups were scored by a panel of judges chosen by the homecoming committee.

“The committee suggests judges like teachers and alumni, then it’s decided from there,” Gonzales said.

Marcus Kidd, assistant director of student programs for the K-State Alumni Association, chooses the final judges. In order to impress the judges, the different teams chose songs and unique moves to make themselves stand out.

Zach Bird, senior in kinesiology and three-time performer for Wildcat Request Live, described what he believed the judges looked for in their performances.

“They look for cleanliness and cool things, as long as it represents K-State,” Bird said. “Our first year we ripped off our pants, and the judges did not like that. This is definitely one of the more highlighted aspects of homecoming, that’s why I love doing it.”

Other Homecoming Week festivities included Paint the ‘Ville and percentage night, where several restaurants in the Manhattan area donated a portion of their profits on Wednesday to the Multicultural Student Center initiative. Activities will continue with the homecoming parade and pep rally on Friday. Winners of Wildcat Request Live will be announced at this Friday’s pep rally along with the overall homecoming week winners. 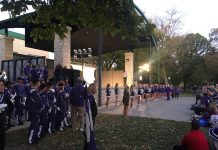 Homecoming 5K kicks off week of events in ‘Manhappiest place on...