Home Community For Riley County EMS, the day is unpredictable, but that’s par for...

At the four Riley County Emergency Medical Services stations around the Manhattan area, coffee is brewing as crew members prepare for the last 45 minutes of their shift at 6:15 a.m. In less than an hour, the next crews will be arriving on site to begin their 24-hour shift.

During the week, James Marstall, emergency medical technician and community outreach officer, estimated that they respond to about 15 calls a day, depending on the day. It is Saturday — a Kansas State football game day, specifically — and on those days, Marstall said, they expect anywhere from 20 to 24 calls before the shift is over.

Although weekends typically bring more emergent and non-emergent calls, Capt. John Talley said there can be a lot of downtime during the day since there aren’t any typical protocols or trainings that need to be completed like during the week.

“Sometimes you don’t get any downtime,” Talley said. “Weekends are the busiest, especially at night.”

On game day, there are only a couple of crew members on site at the station while the game is still in play with several at Bill Snyder Family Stadium. The crew at the station rarely gets called to the stadium, but “you never know,” Talley said.

Marstall, who has been working in the EMS field for six years in Pottawatomie and Riley counties, said on football gamedays, the population of Manhattan swells to be the third or fourth highest city population in Kansas for about eight hours, which means more people who could potentially need medical care.

Morning games like Saturday’s, Talley said, aren’t nearly as busy as those with 6 p.m. kickoffs. In the warmer months toward the beginning of the season, calls come in more frequently. For the first few games of the 2018 season, Talley said they actually had calls waiting.

The calls on game day are not all alcohol related, and EMS doesn’t respond only to calls concerning college students. Sometimes, the calls are related to the heat or a fall.

“It’s a full spectrum, we don’t get to choose,” Marstall said. “It’s the rule of EMS that if you expect something to happen, the opposite will.”

“Anything can happen at any time,” Talley agreed. “Certain situations with certain patients can become violent.”

There are typically more calls, Talley said, when K-State wins the game, especially if it’s a big win, like a Homecoming game or the first win in awhile. Both of those describe the Oct. 13 game.

In compliance with the Health Insurance Portability and Accountability Act of 1996 and other patient confidentiality laws, detailed reporting of calls to the public is strictly prohibited.

Marstall said there is usually a lull after the game until about 9 p.m., but in the meantime, a lot of the care provided by EMS are medical transfers of patients between hospitals or to their residency.

“What the public perceives this job is as blood and guts,” Talley said. “You’ll see blood and guts maybe one percent of the time.”

“You’ll see more blood from starting IVs than anything else,” Marstall replied.

Marstall’s grandfather was an early-EMS provider; at the time, his ambulance was a hearse and his medical training was from the military.

“They would literally go pick up [the patient], throw them in the back of the hearse, run around the front, both people would jump up front and go to the hospital as fast as they could,” Talley said. “What we’re doing now is the same thing in peoples’ living rooms that they’re going to be doing to you in the ER.”

Modern EMS equipment allows them to see so much more of what could be going wrong inside the body than ever before.

“We’re to the point where, not only can we tell if they’re having a heart attack, but we can tell where at in the heart it is and the highest probability of which artery is affected,” Marstall said. “It speeds up that process light-years compared to what it was 30 years ago.”

On the day of the floods over Labor Day weekend in Manhattan, Marstall said the crews were on standby as individuals were being evacuated from their houses. The EMS crews didn’t necessarily aid in the water rescues but were prepared to offer medical treatment as needed.

On Saturday, a call took took the crew 30 minutes outside of Manhattan to northwestern Riley County. There are volunteer first responders in the town, but EMS is called out and stays en route until those first responders have triaged the patient. The call was initially code yellow, meaning the patient likely needed to see a physician in 30 minutes, but was updated to code red, which is more urgent.

Talley, who goes on calls in an SUV separate from the ambulance, said in these cases, he turns on the sirens and begins driving around 20 mph over the speed limit.

“We will get them there as quick as we can,” Talley said. “Depending on [the situation] we might use the sirens on the way to the hospital.”

About 20 percent of the calls are outside of the city limits of Manhattan, Talley said.

William Dunn has been a paramedic for 29 years, having previously served in the military and in law enforcement. He said he likes to sleep in the common room in front of the television and pace around the station while the crew waits for calls.

When he was 18 years old, Dunn broke his neck diving off a dock and, though he wasn’t paralyzed, he said it shaped his decision to go into public service.

“I knew I was given a second chance, and so I wanted to spend the rest of my life helping people,” Dunn said. “I know what pain is like, and that’s why I enjoy bringing people comfort.”

Dunn said one Thanksgiving night, his crew was able to bring back a man who was in cardiac arrest. From that point on, the crew was invited to Thanksgiving supper at his business for many years to follow.

“EMS is EMS across the board everywhere you go, but I guess I wish they just knew the conditions that we operate out of,” Dunn said.

Station one, which is on Claflin Road, Dunn said is not well-sized for the demands of the facility. There are two bedrooms with multiple bunks in them, a small kitchen space, an office space, the common area, two bathrooms and the garage where supplies and vehicles are kept. At a high point in the day, such as when the game day crew is coming through the building before leaving, there can be more than a dozen individuals crowded into the building.

“I’ve worked at four different agencies and this is the only one that has been this way,” Dunn said.

Talley said though he had intended to leave EMS to go into a different medical field when he first started close to 20 years ago, the job “trapped” him because he fell in love with how unpredictable it is. On one call, he said, you can be delivering a baby in someone’s living room, and on another you could be dealing with a patient in cardiac arrest.

“I think, personally, every call holds some kind of memory in your mind because there’s no two calls ever the same,” Talley said. 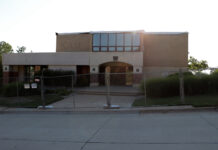 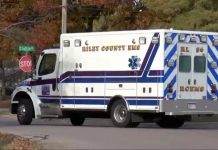 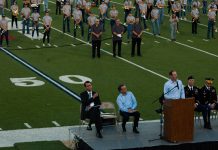 Politicians, first responders reflect on importance of remembering 9/11 in MHK