Home Culture Feature Now a co-owner of Mash Up Gallery, this K-State alum seeks to...

For K-State alumnus Marcus Van Royse, it’s been a journey to now co-owning Mash Up Gallery in Aggieville.

When he was growing up in a small town in Texas, Van Royse knew he needed to be an artist, so he took as many art classes as he could — three, to be exact.

He then went on to complete a tattoo apprenticeship in Reno, Nevada, before running into some of the hardships of life, like financial struggles and family emergencies. These hardships sent him into the food industry, where he worked in fast food, the restaurant business and bartending before deciding to go to college.

After visiting a friend of his who attended K-State, Van Royse fell in love with the campus and the picturesque college lifestyle that the university had to offer. Van Royse then enrolled at K-State a year later, after he obtained in-state residency. He graduated with a major in fine arts in December 2016.

Almost two years later, Van Royse, now 34, has stayed in Manhattan solely because his son is here. His son was born during his time at K-State and he could not leave. In that time, he also designed “A Spot I Love Full Well,” the stained glass mural that sits in the Alumni Center.

Now driven by his love as a father, and passion for his art, the winds of his life brought him to open Mash Up Gallery with his friend and partner Allen Stone in February. It is a place that blends pop culture and different art forms into one place —a mash-up of art.

“I wanted to make sure we had a different vibe,” said Van Royse.

At Mash Up Gallery, customers can buy artisan ice cream sandwiches, get their hair styled and get a tattoo. All in the same day, if they want.

“There’s a lot of room for creativity here…we’re trying to create an environment that’s friendly and fun,” said Freyja, a former K-State student and tattoo apprentice at Mash Up Gallery.

Freyja, who chooses to go by her first name only, said it’s more of a family rather than work at Mash Up Gallery. In the gallery, there are bright colors and art on the wall, music in the background and a movie playing on the television. 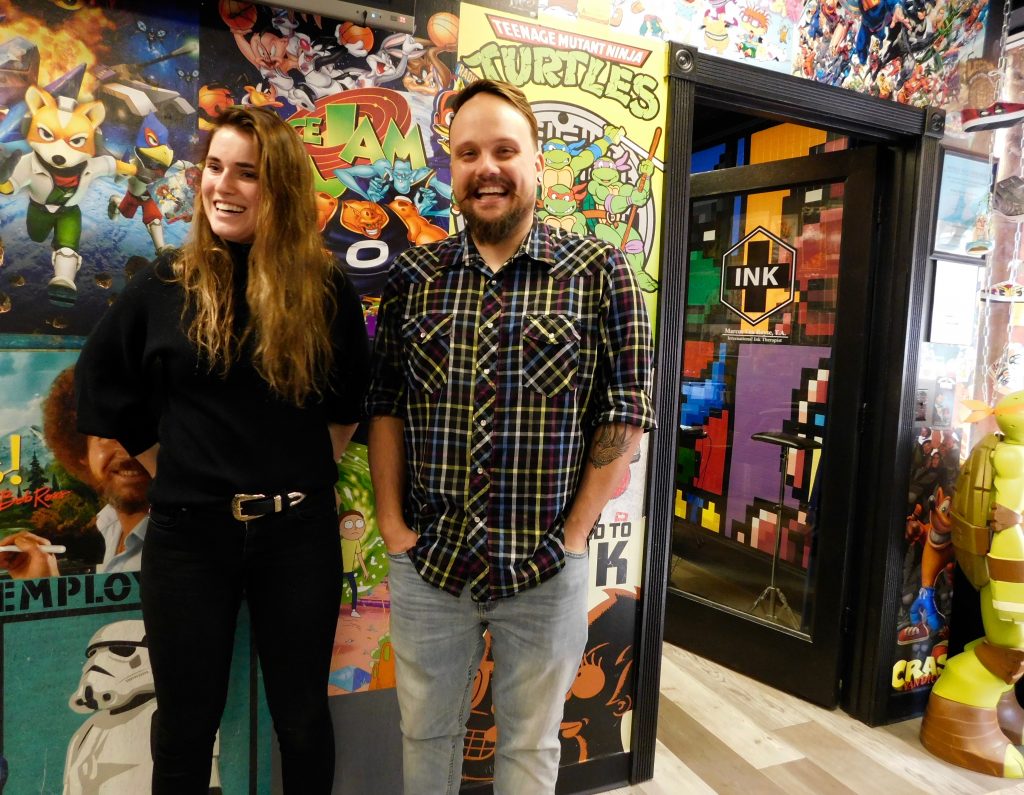 Van Royse said at Mash Up Gallery they accept everybody, they want everyone—no matter their religion, what they look like, or what art they like—to feel welcome at their shop. Other than the way they approach people, Van Royse said they want their shop to be fun and loud and colorful. The owners wanted their place to be pop culture-themed and stylized.

“We are both big nerds at heart,” Van Royse said.

Along with their heart for art, Van Royse and Stone have a big heart for giving back and they try to have a charity event every three-to-six months. On Oct. 12, Mash Up Gallery hosted a “Harry Potter” themed event, called Dobby’s Sock Drive.

Van Royse and Stone said they want to do what makes them happy, and giving back is one of those things.

“We are always trying to raise money and bring awareness to the community,” said Van Royse. “We will not ever forget who we are or where we came from.”