The Kansas State University Young Democrats arranged Students for Kelly, an event for students to hear from Laura Kelly, the Democratic candidate for state governor on Sunday.

About 40 students and community members attended the event in the Wildcat Chambers to hear from the candidate before the upcoming general election on Nov. 6.

Katrina Lewison, USD 383 school board member, introduced Kelly to the audience. Lewison, who ran as lieutenant governor with Joshua Svaty in the primary elections, said she admires Kelly as a role model.

“She will clean up the mess that the Brownback administration left,” Lewison said.

Kelly started out as a leader in the Kansas Parks and Recreation Association, but soon noticed public services were underfunded in Kansas. Kelly was elected to the Kansas Senate in 2004 and has produced a record of work across the aisle, something she said is nearly unheard of in recent politics.

“As one of the few democrats in the Senate, I had to work with those across the aisle,” Kelly said. “Nothing would have gotten done otherwise.”

In her address, Kelly discussed how important it is for young citizens to vote, noting the points are very close between herself and Kris Kobach, Republican candidate for governor. So far, she is on the “good side,” she said.

“We know what will happen if Kobach becomes governor,” Kelly said. “Lucky for us, he is as honest as the day is long. He has promised to reinstate the Brownback tax laws, in-state anti-immigrant policies and suppress voters. We know what would happen without immigrants, especially in northwest Kansas. We can’t let that happen.”

Kelly said she promises to continue to work with those across the aisle if elected. The main focus of her campaign is reversing the “world of hurt” Kansas has been in for the past eight years while under former Gov. Sam Brownback, she said. This includes improving funding to public education, expanding Medicaid and fixing the Kansas foster care system.

When asked about gun legislation, Kelly said she hopes to focus on preventing gun violence with mental health assistance for the public and longer waiting periods involving thorough background checks.

By focusing on educational funding, she said, there is the chance to get students help early in life before mental health issues arise, which could reduce violence.

“I want to bring law enforcement, mental health professionals, educators and students together to find the right solution,” Kelly said. “We will never fix everything, but we can reduce the problems.”

Kelly said she admires the engagement of Kansans across the state and in all age groups. She said she sees the state is on the road to recovery and will continue to improve.

“I will continue to bring folks together to craft good public policy and keep moving forward,” Kelly said. 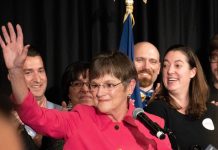 Student senate announces plan for a Party at the Polls, continues to plan college diversity summits

Student senate announces plan for a Party at the Polls, continues...