All three of Kansas State’s varsity eight boats placed in the top ten of 24 places in the collegiate eights race.

Their finishes in the 4,000-meter time trials qualified them for the 300-meter sprint races. The varsity eight ‘A’ placed third overall in time trials with a time of 14:22.6.

In their first race ever, the novice eight placed second overall with a time of 15:42.3.

Redshirt freshman Megan Kelly a member of the novice eight boat said “it felt amazing” to place with her teammates in their first regatta.

“There were so many emotions going on,” Kelly said. “As a boat, we all feel accomplished and more confident for the spring races to come.”

The novice fours race was canceled due to windy conditions resulting in rough waters on the Kansas River, but the overall mood at the end of the regatta was positive.

Redshirt senior Samantha Samskey a member of the varsity eight ‘C’ boat said it was “bittersweet” to compete in her last fall race.

“I’m proud of how much our team has grown and improved since my freshman year,” Samskey said. “I’m excited to see the program continuing to move forward once I graduate.”

For now, Samskey said she’s ready for the rest of her senior year of racing after the showing at the Jayhawk Jamboree.

“My boat had never rowed together before, and we were able to adapt to the changes and move forward,” Samskey said. “We have a lot of potential to get even faster and stronger by the spring season.”

“Overall the team rowed well today, now we will go back to training and just keep trying to get better,” head coach Patrick Sweeney said.

The final medal count for the Wildcats was two silver and one bronze.

The teams Spring season will open up on March 2 at the Oklahoma scrimmage in Oklahoma City, Oklahoma. 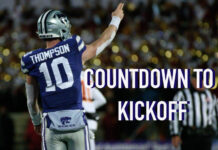 Countdown to Kickoff: 49 days away with defensive end Andrew Schmelzle