The Kansas State soccer team will get one last chance to win or tie a Big 12 match when it finishes its season in Ames, Iowa against the Iowa State Cyclones on Thursday.

The Cyclones’ most prolific scorer is sophomore midfielder Kassi Ginther. She has scored four of the team’s 17 goals this season and has assisted on another.

In the goal for the Cyclones will likely be sophomore goalkeeper Dayja Schwichtenberg. She has saved 99 shots, which is 76.7 percent of shots she has seen this season.

The Wildcats are 4-11-2 and have lost eight straight matches, dating back to a Sept. 16 win over the University of Tulsa, the last game of their non-conference schedule.

K-State has lost all eight Big 12 matches, but No. 9 Iowa State will be their best shot at a result.

K-State’s best offensive player is junior forward Katie Cramer, who has scored two goals and assisted on three more. She is followed up by sophomore midfielder Brookelynn Entz, who has two goals and two assists.

The Wildcats’ main goalkeeper is sophomore Emma Malsy. Her goals against average is 1.39, and she has saved 78 percent of shots she has seen. She has also recorded six shutouts this year.

While the Wildcats are eliminated from 2018 Big 12 Championship contention, the Cyclones can play their way into a tie for the eighth and final seed in the tournament with a win and an Oklahoma State loss on Thursday.

K-State will play its final match of the season at 7 p.m. Thursday at the Cyclone Sports Complex in Ames. It will be streamed online on Cyclones.TV and broadcast on 101.5 KROCK out of Manhattan. 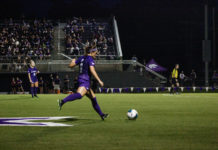 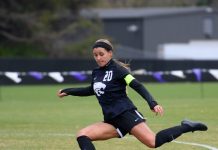