The season officially gets underway Nov. 12 against the University of Nebraska Omaha, but K-State will play Fort Hays State in an exhibition game this Thursday.

The exhibition matchup with the Tigers will not be a cakewalk as exhibitions often are. The Tigers almost took down Kansas in overtime in Lawrence earlier this week.

The Wildcats went 18-16 last year and three rounds deep in the women’s NIT before California-Davis sunk them 71-69 in Manhattan. They were 7-11 in Big 12 play.

K-State said goodbye to seniors Shaelyn Martin and Kaylee Page in the offseason.

Despite those losses, K-State returns leaders on the court from last year, including senior guard Kayla Goth and junior forward Peyton Williams. They also return sharp-shooting sophomore guard Rachel Ranke, who hit a team-best 89 three pointers and knocked down 32 percent of such shots.

Goth was the Wildcats’ leading scorer last season, averaging 17.5 points per game. Williams was right behind her with 14.7 and Ranke was third, with an average of 11.5.

Goth was named a preseason candidate for the Nancy Lieberman Award last week. Goth was one of twenty point guards in the nation named to the watch list, and the award is given to the best point guard in the country each season.

Williams was named to the Katrina McClain Award watch list, which recognizes the best power forward in the country.

Goth and Williams were both named to preseason All-Big 12 teams. The team, selected by coaches, included Goth on its first team and Williams was an honorable mention. Goth is the first Wildcat to earn those honors since Breanna Lewis prior to the 2016-17 season.

Head coach Jeff Mittie brought in five-star recruit Christianna Carr, the eighth-ranked guard in the country, from Manhattan High School in the offseason. Carr’s father, Chris, has been one of Mittie’s assistants for three years now.

K-State’s non-conference schedule features matchups with Power Five opponents such as Vanderbilt in Manhattan, and a neutral site battle with Arizona State in La Crosse, Wisconsin.

They will also take a trip to Cancun, Mexico for the Cancun Challenge from Nov. 22-24. They will play Syracuse, DePaul and Princeton before coming back to the United States.

The Wildcats were picked to finish eighth in the conference by the coaches in their preseason poll. Baylor was picked to win the conference, followed in order by Texas, West Virginia, TCU, Oklahoma, Iowa State, Oklahoma State, K-State, Kansas and Texas Tech. 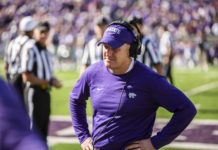 Amid the uncertainty, K-State football continues to practice

K-State volleyball gears up for 2016 season