The rock band will cover The Replacements as part of its set.

Headlight Rivals has produced one EP called the “Juliette EP” and plans to release their first album in February. “Juliette EP” is available to stream on SoundCloud.

Cousins Eric and Kris Kleiner play guitar and drums, respectively, alongside bassist Seven Arizona Black. Kris met Black while playing with The Mathematics. After The Mathematics fell apart, they reformed as Headlight Rivals.

The name Headlight Rivals comes from the game of headlight football. This variation of football is played at night with the field illuminated by cars.

“I think its kind of like a small town, rural or midwestern thing,” lead singer Eric Kleiner said.

Even to this day the band plays the game.

Taking inspiration from bands like Cheap Trick, The Beatles, and older country and punk rock bands, Headlight Rivals wants to emphasize that they are a “live band.”

Eric Kleiner said he feels this helps them to stand out in the local music scene.

“Part of our schtick is we party with the crowd,” Kleiner said. “It’s kind of an interactive show. We’re just a straight forward rock-and-roll band. There is no real show.”

The Headlight Rivals members said they plan to bring a good time to Aggieville.

Admission to see Headlight Rivals at Auntie Mae’s Parlor is $5 and will start at 9 p.m. For more information on Dungeon Fest, visit the Auntie Mae’s Facebook page. 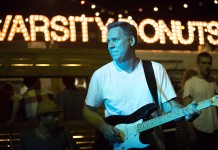 Rich Yarges & The Pop Mechanics to perform Nov. 1 at...