For the third week, the Tuition and Fees Strategies Committee met to review the per-credit-hour surcharge for the College of Business Administration, which is $65.

There was confusion within the committee in previous weeks about where that surplus was going, as it was listed solely as funds that had been “transferred out.”

In the meeting prior, Jordan Kiehl, student body president and senior in industrial engineering, and Ryan Kelly, speaker of the student senate and junior in communication studies, adjourned the meeting on Oct. 23 with the goal of speaking with Kevin Gwinner, the dean of the College of Business Administration, to have remaining questions answered. Gwinner, who has a conflict with the meeting time, was not at this committee meeting either.

It was determined that the “transferred out” funds were returned to Kansas State due to university-wide budget callbacks stemming from decreases in enrollment across the campus, Cindy Bontrager, vice president of administration and finance, said.

Bontrager said, since all faculty salaries are based-off of uncertain, “soft money” enrollment numbers have a big impact on how much money can be dedicated. The funds gathered by the surcharge, Bontrager said, are similar to the privilege fee.

The committee also discussed how the modernized budget, which is currently being phased in this academic year, will impact the fluctuating remaining balance in the surcharge account. Bontrager and Taber both said with the new budget, colleges will be able to predict enrollment on a more-accurate and future-oriented basis.

Hannah Heatherman, junior in business administration and student senator for the college, said from a recruitment and retention standpoint, logically, in times of lowered enrollment the amount of faculty required would be lower to provide the same quality of education.

Ultimately, the committee voted 7-0 to accept the surcharge as reported by the college.

The committee also voted on the Career Development Fee, which was not discussed at length. Kelly said this fee in particular did not have as many questions surrounding it. The committee voted 7-0 in favor of accepting this particular fee review.

After this meeting, the recommendations voted on by the committee will be sent to Taber in a final report, Kiehl said.

The committee will reconvene at 5:30 p.m. on Nov. 6 to review the College of Arts and Sciences in the Student Governing Association Conference room. 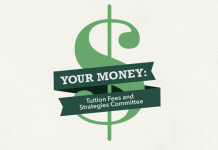