Music, dancing and the embracing of a culture filled the Kansas State Student Union on Saturday as part of the Indian Students Association’s Sanskriti 2018 event.

“Basically, Sanskriti means culture, this event is to spread knowledge about Indian culture,” said Sofiya Sabreen, graduate student in architecture and former president of the ISA. “India is a land which is very diverse in cultures, language and religions, but the nation is known for its unity and diversity.

“It’s that unity we want to show to the community of Manhattan who has accepted us as one amongst them,” Sabreen continued. “That is what we as a group want to show with Sanskriti.”

Featuring many aspects of the vast culture that comprises of India, this annual event showcased traditional music, garb and art and invited students from all backgrounds to join the festivities.

“Over the year we have tried to make it more culturally inclusive so that many domestic students and other students from different countries can take part in it,” said Pranav Savanur, sophomore in biology and public relations officer for the association. “Our main focus this year is put in a lot of work and efforts to make it more open.”

The event welcomed all students to come and learn about Indian culture and its many expressions.

“We’re providing a platform, because we feel responsible as an international organization,” Savanur said. “As an independent organization we want to set that stage for students to embrace new culture and make more connections with transfer students.”

Workshops at the event provided insight into some of the traditions of India, provided dance lessons and facilitated henna tattoo art.

The association also created a Rangoli in the courtyard, which is a form of art that is created on the floor for festivals to provide decoration and is thought to bring good luck.

“We have students at K-State who did the Rangoli with powdered color,” Savanur said. “People think it’s paint but it’s not, so it’s very hard to do, but they do it with their hand.”

At another table, there was a showing of the many holidays celebrated within India.

“We respect and accommodate all religions on Earth, so there is literally every religious holiday in India,” Savanur said.

The morning’s events led into Forum Hall for a showcase of invited artists who performed dances and music ranging from traditional to modern works.

“We have one Bollywood performance, then we have one fusion of all the south Indian music performances,” Savanur said. “In India we have over a thousand languages and over a hundred that are official languages.”

During the acts, the audience clapped and sung along, cheering and applauding the dancers and singers. Sabreen engaged with the audience and invited members to share their experiences in India.

Savanur said the goal of the event is to introduce people to the Indian culture so they can also take part in it.

“It’s good to be at a university where you can experience other cultures like this,” Myers said. “That’s how we learn to respect each other, how we learn to admire each other and understand our different points of view.”

This event also won the “Student Organization Event of the Year Award” in 2017.

“That was really nice of Kansas State University and the community of Manhattan to recognize our efforts,” Sabreen said. “We really look forward for the community to accept us more.” 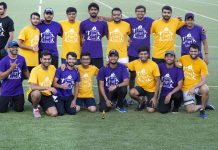 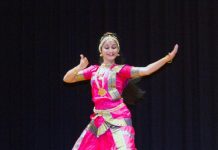