After being named to the Naismith Trophy watch list with teammate and junior guard Barry Brown Jr. on Monday, Wade was put on the preseason watch list for the National Association of Basketball Coaches (NABC) Player of the Year Award on Monday.

20 players in total were named to the list, and Wade joined Kansas junior forward Dedric Lawson as the only Big 12 players up for the award.

Wade was recognized again on Tuesday, this time for the John R. Wooden Award. The senior is one of 50 preseason candidates for the award, which is one of college basketball’s most prestigious honors.

Wade and the No. 12/11 Wildcats will take on Kennesaw State this Friday at 7 p.m. to tip off the regular season.

After the Kansas State volleyball team defeated West Virginia in three straight sets on Saturday, redshirt freshman outside hitter Brooke Heyne was named the Big 12 Rookie of the Week on Monday.

Heyne amassed 11 kills and 10 digs on a .450 hitting percentage last Saturday against the Mountaineers. She has started the last five matches and leads the team in kills with 54 during that span.

This is the second time Heyne has received the award, as she was selected for it on Oct. 22.

Heyne and the volleyball team will travel to Austin, Texas, to face the No. 5 Texas Longhorns on Wednesday. 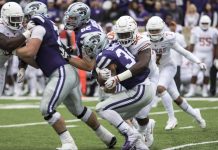 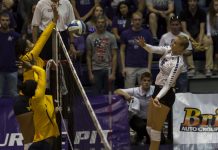 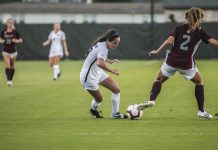 Wildcat soccer ready for Big 12 opener against No. 15 Oklahoma State

Wildcat soccer ready for Big 12 opener against No. 15 Oklahoma...