Kansas State basketball returned to the hardwood on Friday against Kennesaw State at Bramlage Coliseum in the opening game of the U.S. Virgin Islands Paradise Jam Tournament.

K-State came into the matchup ranked No. 11 preseason in the Coaches Poll and off a dominating exhibition victory over Pitt State.

Junior forward Xavier Sneed was ruled out of the game with an ankle injury.

Senior forward Dean Wade and junior forward Makol Mawien dominated down low for the Wildcats. Through the first five minutes, provided all eight of K-State’s points.

No. 12 K-State starts season against Kennesaw State on Friday

K-State would go on a three-minute scoring drought while the Owls scored a 6-0 run ended by a layup from Mawien. However, Mawien sat for most of the first half after picking up two fouls.

Junior forward Austin Trice played his first official minutes as a Wildcat with a blocked shot and a pair of rebounds.

In his first minute of play, freshman guard Shaun Neal-Williams had a steal and an assist.

Kennesaw State got into foul trouble early, putting K-State in the bonus with eight minutes remaining in the first half.

The Wildcats and Owls both ended the half making one out of their last seven shots, but the Wildcats held a 31-27 lead going into the locker room.

Senior guard Barry Brown, Jr. led the Wildcats with 11 points in the first half. Trice had eight rebounds. The Wildcats were one-for-six from the three-point line. K-State scored 20 points in the paint and 11 off Kennesaw State turnovers.

Senior forward Kosta Jankovic led the Owls with nine points, while junior forward Isaac Mbuyamba had five rebounds. The Owls were three-for-six from behind the three-point line and had eight points in the paint.

After opening the second half with a three-pointer, Kennesaw State went on a five-minute field goal drought.

The Wildcats began to pull away early in the second half as the Owls would turn the ball over five times in six minutes.

Kennesaw State kept the game within reach before the Wildcats went on a 6-0 run to push the lead up to ten going into the under eight TV timeout.

The Owls endured another scoring drought late in the game before freshman forward Ugo Obineke made a jumper. The Owls shot for two out of the last 17 attempts to end the game, while the Wildcats pulled away on a 15-2 run.

Wade had 15 points on the night and Mawien had 13 points. Austin Trice had 12 rebounds and eight points. Brown also had a big night with 15 points and four steals.

The Wildcats had an astonishing 42 points in the paint, 24 of which came from fast break points.

K-State will play Denver on Monday at 8 p.m. in Bramlage for a doubleheader with the women’s team. 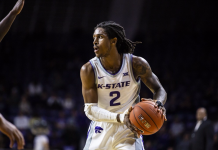 K-State extends Big 12 win streak to nine with win over...