Kansas State has the top college dining program in Kansas, according to a set of 2019 rankings released by Niche.com. In the nation, K-State comes in at 92nd, while the University of Kansas is ranked 183rd.

Derby, referred to as “the Derb” by students, is the primary dining center for students who live in Haymaker, Ford, Moore and West Halls. The Derb is known for its community dining atmosphere.

Ashley Helm, sophomore in life science, said she loved the Derb because of the long talks she had with her friends over meals.

“I just had fun spending time there because it was a space that allowed my friends and I to get together and hangout,” she said. “We usually ended up spending three to four hours there just talking and catching up on each others’ weeks while eating a ton of food.”

Renovations are coming to the Derb, but not immediately, dining center director says

“My favorite thing about Kramer is the seating,” she said. “It feels more like I’m in a restaurant, and it doesn’t feel like I’m at a dining center on campus.”

The Van Zile Dining Center is open to students who live in the residence halls of Boyd, Putnam and Van Zile. The atmosphere of Van Zile is homelike and the center occupies a smaller space.

Nathan Masson, senior in elementary education, said the environment and community of Van Zile is what draws him in. He said he ranks this dining center over the other two on campus.

“It’s not as wild and crazy as the Derb and Kramer,” he said. “[Van Zile]’s atmosphere is super homey and welcoming. The people eating and greeting you are members of your community and it’s such a small space that it makes it more personal.” 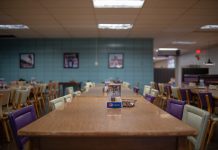 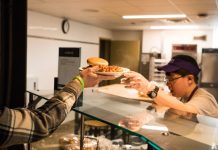