On Tuesday, members of the Kansas State community gathered in the K-State Student Union to hear guest speaker Luc Bensimon tell his story and memorialize the names of transgender people who died this year in honor of Transgender Day of Remembrance.

Transgender Day of Remembrance is observed to help acknowledge and honor the men and women who have lost their lives as a direct result of transphobia. This event in particular was hosted by the K-State Gender Collective and the LGBT Resource Center.

During a busy lunch hour, Bensimon stood on a stage in the bottom floor of the Union and addressed the issue of violence toward transgender people across the country. He also led a moment of silence for all the fallen trans individuals.

Bensimon is not only an activist for transgender people but is also the current president of the Kansas Statewide Transgender Education Project and a member of the Black Transmen Incorporated initiative, both of which help transgender people find their footing, keep one another safe and ensure protected rights for all trans individuals.

Bensimon said he has dealt with adversity since he was born with a mild form of cerebral palsy.

“Being born African-American, coming into this world assigned female and being born physically challenged,” he said. “That’s three strikes right there.”

The harrowing bits and pieces of Bensimon’s life growing up reflected the normality of hatred and fear that comes with transphobia. While growing up with a “radical” mother who was a member of the Black Panther Party, he said he felt his family wasn’t entirely accepting of his gender identity, which kept him down throughout the years.

While Bensimon’s story empowered people to become better allies to their LGBTQ friends and family, he also shared the goals and ambitions for all LGBTQ communities, which includes the recent Lambda Legal lawsuit against Kansas to correct the gender on one’s birth certificate.

LGBTQ* Alliance aims to support faculty, staff to push the needle in a positive direction

“The death threats came soon after that,” Bensimon said.

After Bensimon’s stories of hardships throughout his life, he listed the names of every transgender person who has passed away this year due to transphobic violence. As he did he asked the crowd to repeat their names loudly so that “nobody can forget them.”

The Union Courtyard echoed with the names of each transgender person, some of whom are pictured in the Transgender Day of Remembrance Art Exhibit featured in the William T. Kemper Art Gallery.

During the day in the courtyard, the KSU Gender Collective handed out buttons, stickers and information on how people can get involved with the LGBTQ community at K-State.

One of the members, Rachel Hunt, junior in biology, explained how the rally came about.

“We want to raise awareness that there is a disproportionate amount of trans folks, and trans folks of color, that are victims of violence every year,” she said. 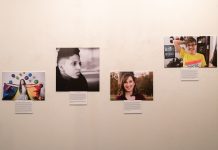 Art gallery gives exposure to transgender, non-binary lives of the past and present 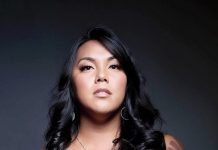