After contracting swine flu in 2009, Kucerik — a St. George, Kansas, resident — said he never fully recovered. Reaching out to different specialists across the state, they looked for some kind of reason as to why, but nothing was conclusive.

However, after taking a test at the University of Kansas Medical Hospital in Kansas City, Missouri, Dr. Michael Crosser made the connection to a potential genetic issue. Crosser sent him to Dr. Majed Dasouki, who diagnosed him with a mitochondrial disorder.

To claim disability the state required him to provide evidence in court. When he went, they requested that he take a test to prove the diagnosis. The $50,000 price tag for the test, which had a high rate of failure, was a barrier, Kucerik said. Unable to pay for the insurance that would cover the test, Kucerik’s claim was dismissed.

While struggling to make ends meet for five years, Kucerik thought back to his family history.

In 1927 his great-grandmother, Sophie Brown, purchased a Union Loom “fresh off the assembly line.” A year earlier her husband Balther Brown had made her a loom, which got her into the hobby.

Kucerik says the Browns out in Calahan, Colorado, used the loom to repurpose the old clothing of neighbors and sold their goods during the Great Depression. This secondary source of income helped them to survive. Kucerik said this is what got him started looming.

“When times get tough I figured well, [looming] got members of my family through the Depression … it may as well get me through hard times,” Kucerik said.

Kucerik pulled out the antique loom and got to work three years ago. After receiving a crash course in looming from his mother, he started to experiment, unsure of how successful it would be.

For the most part, Kucerik was self-taught, but he had been around looming his entire life. Sophie Brown passed the loom down to her daughter Agatha Kucerik, Kucerik’s grandmother, who picked up the tradition.

“I remember sitting on my grandpa’s lap and pretending to actually do it,” Kucerik said. 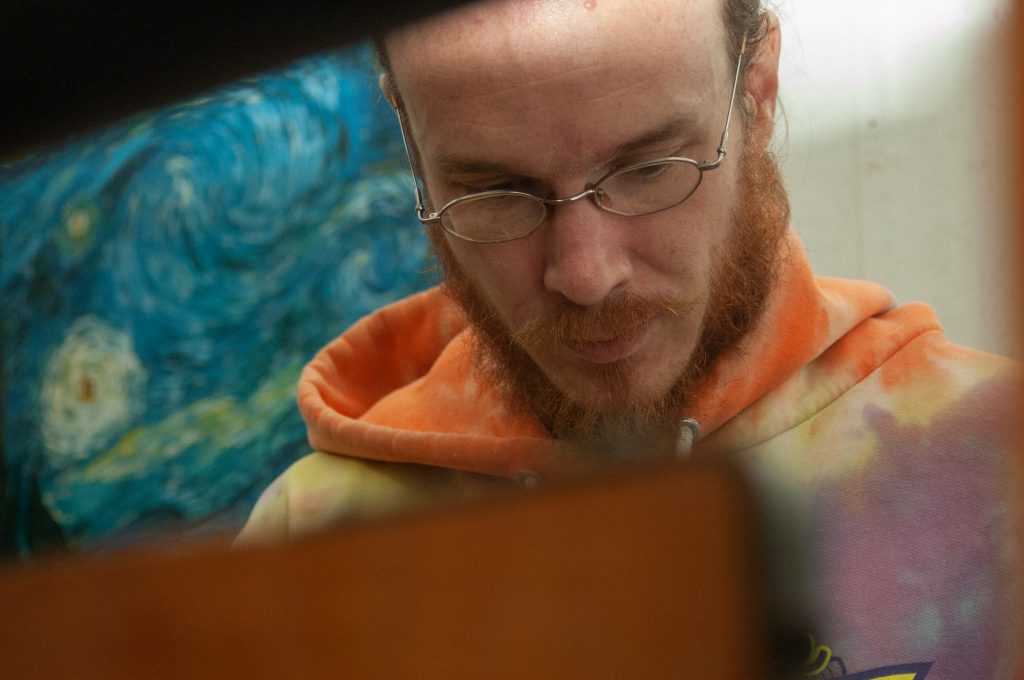 In the tradition of his great-grandmother, Kucerik repurposes old cloth, even using the same Maysville cotton warp as her. Warps are the stationary strings that fabric is threaded through during the looming process.

Kucerik frequents the local thrift stores and asks for donations. He receives a lot of old bedsheets that he turns into patterned rugs, runners and placemats.

By using the same Union Loom that his great-grandmother bought, Kucerik is able to hold onto that family connection.

“That’s one of our top selling points,” Kucerik said. “Everything is made on a 1927 Union Loom, which has been in the family for four generations. … That key part means a lot … due to the fact that it’s not just a simple hobby it’s not just something [we] got into on a whim. … It’s something that the family has been doing for 91 years.”

Two years ago, after using the loom for a year, Kucerik started his business from his home in St. George. Naming it Loony Loomworks, the mostly online store has seen increasing success.

Most recently Kucerik and his fiancee went to NedFest, an outdoor music festival in Nederland, Colorado, mostly on a whim and found a large interest in their products.

“It’s really surprising the direction things are going,” Kucerik said. “Going from something of, ‘Yeah, this is going to help bring in some extra income’ … so we aren’t living paycheck to paycheck … [to] ‘Hey, we might have something here.'”

For Kucerik, all he wants from his business is to be able to provide for his family. His fiancee still works her 9-to-5 job while he stays at home, continuing to work on the loom.

Using the old, Kucerik brings it new life. One of his clients had some sundresses from their recently deceased mother. None of the family members had a need for them, but they didn’t want to throw them away. Kucerik offered to make the dresses into placemats.

“She loved that idea,” Kucerik said. “That way every time they had a family gathering, grandma was there in spirit.

Repurposing for him is more than just a methodology of thrifting. Instead, it’s a way to maintain the sentimental value attached to everyday products.