Home Culture Feature Art gallery gives exposure to transgender, non-binary lives of the past and...

From Nov. 7-16, the William T. Kemper Art Gallery in the K-State Student Union is hosting an art gallery for Transgender Day of Remembrance, which is observed on Nov. 20. The gallery has art and images to both educate viewers and to give faces and names to the many transgender men and women who have died.

The gallery has numerous photos around the room displaying some of the transgender and non-binary people whose lives were lost to hate crimes and suicide prompted by intense societal pressure. The Transgender Day of Remembrance website records these deaths internationally.

A video in the center of the exhibit shows clips of transgender individuals speaking about their experiences to raise awareness to those who may not know much about their community.

Many were drawn into the gallery initially by the videos and also out of a desire to learn more.

“I may not fully understand the transgender community, but why not take a chance to understand,” Tyler Burns, senior in social sciences, said. “I maybe don’t always see eye-to-eye with everyone, but if I can understand I can better learn to love people.”

The gallery features a wall dedicated to many early and famous transgender individuals, some of whom were activists for the transgender rights. It also shares information so viewers can learn more about the foundation of the transgender movement.

“I think what was interesting was the history and how far it goes back,” Shelby Benton, senior in social sciences, said. “Right now, everyone sees this as more of as a movement that is happening just now, but it has been happening for quite a while.”

One wall of the room had 18 smiling photographs and short biographies of transgender men and women who lost their lives just in 2018, many of whom were murdered.

Fifty-six percent of transgender individuals reported attempting suicide after their family chose not to speak or spend time with them because of their identity. To Rachel Haskell, senior in kinesiology, galleries and days of remembrance like these are important because they give support to a community that is vulnerable to hate.

The Transgender Day of Remembrance was started in 1999 by transgender advocate Gwendolyn Ann Smith as a vigil to honor Rita Hester and her memory.

Hester was a transgender woman who was killed in 1998. The vigil was a commemoration of all the transgender people who were lost to violence since Hester’s death, and it began a tradition that has become the annual Transgender Day of Remembrance, observed officially on Nov. 20 each year. 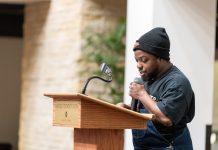 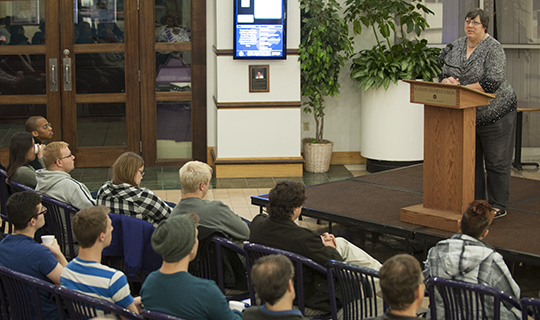