Kansas State separates itself from Kansas at the bottom of the league, dark horses Texas and Iowa State face off this week and West Virginia and Oklahoma look to stay on top.

Kansas lost to Kansas State in the Sunflower Showdown for the tenth straight year, this time by a score of 21-17. The loss makes KU the first Big 12 team to be mathematically eliminated from bowl eligibility.

The Jayhawks really shot themselves in the foot with a fourth quarter drive that saw two 60+ yard runs erased because of holding penalties. KU was leading 17-14 at the time.

Kansas will play its final road game of the year at 6:30 p.m. Saturday against Oklahoma on FOX.

K-State defeated the Jayhawks 21-17 on Saturday to win the Governor’s Cup. Running back Alex Barnes leads the Big 12 in rushing with 11 touchdowns and an average of 103.5 yards per game.

Needing to win its final two games to become bowl eligible and keep its bowl game streak alive, the Wildcats will host Texas Tech on Saturday at 2:30 p.m. on ESPNU.

TCU has struggled all season and was destroyed 47-10 by West Virginia in Morgantown on Saturday. In order to keep their bowl hopes alive, the Horned Frogs will need to win both of their remaining two games

The quest for bowl eligibility begins against Baylor at 11 a.m. Saturday on FS1.

Oklahoma State was close to beating Oklahoma on Saturday, but fell 48-47 after failing to take the lead on a two-point conversion late in the game.

The Cowboys are tied for third in the nation in sacks with 36 on the season.

With two games left, head coach Mike Gundy and the Cowboys still have an opportunity to make a bowl game.

The Cowboys will play West Virginia at 2:30 p.m. Saturday on ABC.

Baylor lost to Iowa State 28-14 on Saturday. With one more win, they could become bowl eligible for the first time under head coach Matt Rhule. Baylor will have a chance for that sixth win at 11 a.m. Saturday against TCU on FS1.

Wide receiver Antoine Wesley leads the nation in receiving yards per game, averaging 134.7 per contest. As a team, Texas Tech has the number one passing offense in the Big 12 and will face a K-State team that is fourth in the Big 12 in passing defense.

The Red Raiders will travel to Manhattan to face K-State at 2:30 p.m. Saturday on ESPNU.

Texas is already bowl eligible, but kept its Big 12 Championship hopes alive after avoiding a third conference loss by beating Tech 41-34 on Saturday.

The Longhorns will face off against the Cyclones, another dark horse fighting for a spot in the conference championship game, in Austin, Texas, at 7 p.m. Saturday on the Longhorn Network.

The Cyclones are in control of their own destiny and are still in contention for the Big 12 Championship. If they win their final two games against Texas and have just two conference losses, they hold a tiebreaker over West Virginia should the Mountaineers lose to Oklahoma in two weeks. That outcome could put them in the championship game.

Freshman quarterback Brock Purdy and the 18th-ranked Cyclones will match up against Lil’Jordan Humphrey and the No. 13 ranked Longhorns on Saturday.

It is unlikely that the Mountaineers can reach the College Football Playoffs but could end up in the Alamo Bowl if the team can win out.

The Mountaineers will play Oklahoma State at 2:30 p.m. Saturday in Stillwater, Oklahoma, on ABC.

Oklahoma avoided being upset by in-state rival Oklahoma State, eking out a 48-47 win on Saturday in Norman, Oklahoma.

The Sooners still have a chance to reach the College Football Playoff but will have to win their last two games, including the Big 12 Championship. This would possibly mean that the Sooners would have to defeat West Virginia in back-to-back weeks.

Oklahoma will play Kansas in primetime on Saturday at 6:30 p.m. on FOX. 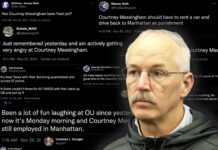