For the second time this season, the Wildcats defeated the Jayhawks, this time on their home court in Lawrence on Wednesday night, getting their their fourth Big 12 win of the year and snapping a two-match losing streak.

In the first match of the Sunflower Showdown this year, the Wildcats were able to sweep the then-No. 22 Jayhawks inside Ahearn Field House in Manhattan. Wednesday’s win gives K-State the season sweep of its rivals.

In the first set of this match, Kansas won 25-22 but neither team hit higher than .189. The Jayhawks held a seven-point lead twice in the set before scraping by.

In the second set, K-State scored first but then Kansas went ahead and never looked back, finishing with a 25-23 win. The Jayhawks recorded a .441 hitting mark as they went up two sets to none and were on pace to sweep the Wildcats. K-State hit just .279 with five attack errors in the second set.

The third set saw a K-State team that has struggled against Big 12 opponents this season break out for a 9-4 run sparked on a kill by junior middle blocker Elle Sandbothe. The largest lead for the Wildcats was 13. The Jayhawks lost this set 25-12, recording just eight kills and two service errors.

Trailing 2-1 going into the fourth set, K-State hit for a .333 efficiency while holding Kansas to a hitting percentage of just .220. Although Kansas held the edge in kills at 16-13, K-State had four blocks helping them to a 25-20 win to even up the match at two sets each.

In the fifth and final set of the match, K-State scored first and although Kansas was able to tie it three times, the Jayhawks never pulled ahead. The Wildcats held the Jayhawks to just nine points in this set and scored 15 to sweep the season series.

K-State will host its final home match of conference play with senior day on Saturday against Texas Tech. The match is set to start at 8 p.m. and fans can watch the game on ESPN3 or listen on KMAN radio. 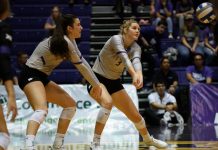 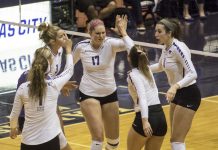