Due to the cancellation, KSDB-FM 91.9 will instead host Cuee, an artist from Lawrence, and Tanner Agpoon, an artist from Kansas City, live in their studios as part of their Classroom Series.

“KSDB is scrappy, so we tentatively planned a backup plan called the Classroom Series,” Zach St. Clair, junior in English, said. “This is a show where we have local artists play a live set in our studios. We are an unwavering force for music that can’t be quelled.”

The series will broadcast from the KSDB studio in McCain starting at 7 p.m. The performances will also be broadcast using YouTube and Wildcat Watch.

“Obviously we are disappointed that the concert tour that was supposed to happen got cancelled, but we make do with what life throws at us and we roll with the punches,” St. Clair said. “We didn’t want to waste the opportunity to hear local artists, so we are very excited to hear Cuee and Tanner Agpoon play for all of you on air.” 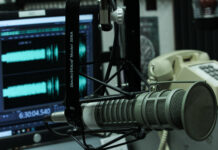