The box, which said it prefers to go by Absence, answered a few questions from the Collegian via Instagram. The full conversation is attached in the image below.

UPDATE 12:30 p.m. Friday: The big, black box is a traveling art installation called Absence. We’ve reached out to the Instagram account, @absence_ksu, for more information on the installation.

It’s a big, black foam box that’s been sitting outside Kedzie Hall for the last couple of days.

And that’s pretty much all we know about it.

The sudden appearance of the cube — covered in what appears to be tar— has intrigued students walking around Kedzie since it first appeared on its north lawn earlier this week.

Tyler Bertsch, freshman in chemical engineering, and Ashlyn Richey, freshman in biology, said they’d seen the box earlier but stopped by to look at it more closely Friday morning.

“It’s probably some kind of art,” Richey said. “There’s a lot of weird art on campus. As a fellow prankster, I can appreciate this cube.”

On Thursday, members of the Collegian and KSDB staff were able to get inside the box using a top-side hinged door. Inside, there were benches on two sides of the box, wheels at each of the bottom corners, a 3-foot hole in the ceiling, and a gas stove held up by a wooden arm at the back of the box.

Allie Dieter, senior in advertising and creative lead for Collegian Media Group, said she saw people move the box to a space just east of Kedzie around noon on Thursday.

“I saw people inside the box, and they lifted the box up and rotated, and started walking very slowly across the pathway,” Dieter said.

A representative for K-State facilities said he was aware of the box’s sudden presence outside Kedzie, but did not know who placed it or for what purpose and instead referred the Collegian to K-State’s Department of Art.

Katelin Schmedemann, office specialist in the Department of Art, said the department was not responsible for placing the box either, but suggested that the box could still be an artistic installation done independently by a student or faculty member.

Bertsch said the box reminds him of ice fishing huts he’d seen when he lived in North Dakota, but he couldn’t think of why one would be located on campus.

If you have any information on the box, please let us know on social media or by email at news@kstatecollegian.com. 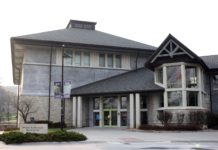 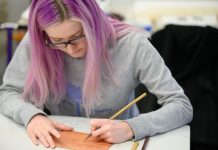