The Kansas State men’s basketball team swept through the competition at the Paradise Jam to win the trophy.

Starting with a 95-68 thrashing of Eastern Kentucky last Friday, the Wildcats defeated Penn 64-48 on Sunday and finished things off with a 82-67 win over Missouri in the championship game on Monday.

Senior forward Dean Wade led the way and was named the Paradise Jam MVP after averaging 17.3 points per game and 6.3 rebounds per game during the tournament.

Senior guard Kamau Stokes elevated his play during the tournament.

In the season’s first two games, Stokes totaled just eight points and shot 1-for-8 from behind the three-point line. In the Virgin Islands, he had games of 10, 16 and 10 points for an average of 12 points per game.

Stokes also upped his three-point shooting percentage, going 4-for-11 (44 percent) from deep during the tournament.

Through five games, three Wildcats are average double-digit points. Wade and Brown are averaging 15.8 and 15.6 points per game, respectively, while junior forward Xavier Sneed is averaging 13. Wade also leads the team with an average of 8.6 rebounds per game.

As a team, K-State is scoring an average of 72.2 points per game, and allowing 56 points per game to its opponents. The Wildcats have outrebounded opposing teams 192-153 this season, are averaging 8.2 steals per game and just over three blocks per game.

On Saturday, the Wildcats will host Lehigh University. The Mountain Hawks are 4-1 this season, with their only loss an 83-62 defeat at the hands of the University of Miami .

The Wildcats have won 25 straight against non-conference teams at home, and will look to extend that streak at 3:30 p.m. inside Bramlage Coliseum Saturday. 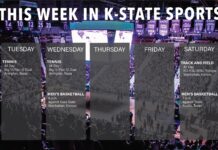