Home Other Sports What to Watch Championship week has arrived. Here’s who has a shot at the College...

The Red River Rivalry will unite for the second time this season with much higher stakes, as the winner will take home the Big 12 trophy and one team might be playing in the big four-team tournament.

These two teams met on Oct. 16 for their annual regular-season game, as then-ranked No. 19 Texas pulled off the upset in a high-scoring battle 48-45. Oklahoma’s defensive coordinator Mike Stoops was let go after the game.

The Sooners have been on a tear since, as they won their last six games to end the season, including defeating then-ranked No.13 West Virginia 59-56 in a shootout.

The Longhorns have lost two games since their upset win against Texas Tech. They lost a heartbreaker to then-ranked No. 16 West Virginia 42-41, as well as being stunned by Oklahoma State a week earlier in Stillwater 38-35.

Both quarterbacks are spoiled with talented wide receivers, but each has their go-to receiver they like to target. For Murray, it’s junior Marquise Brown; Brown has 1,264 yards on 70 receptions and he has caught 10 of Murray’s 37 touchdowns. For Ehlinger, it’s junior Lil’Jordan Humphrey; Humphrey has 1,058 yards on 72 receptions and has caught eight of Ehlinger’s 23 interceptions.

The Dr. Pepper Big 12 Championship Game will kick off on Saturday at 11 a.m. on ABC.

The Alabama Crimson Tide, defending national champion, will once again be playing in the SEC Championship Game. The Crimson Tide defended their national title and No. 1 ranking in the regular season, taking care of each opponent that came their way, most notably the then-ranked No. 3 LSU on the road 29-0.

The Bulldogs have done great this season; their only loss this season was to then-ranked No. 13 LSU 36-16 in week seven.

The last meeting between these two teams was in last season’s National Championship game. Georgia will be seeking revenge as they had that game in their hands, as they went into the fourth quarter with a 20-10 lead on the Tide, only to watch the Tide get a big touchdown in overtime to sink their hearts on what could have been, and the Tide won 26-23.

Sophomore quarterback Tau Tagovailoa has been the man for the Crimson Tide this season. Tagovailoa has thrown for 3,189 yards on 189 completions, along with an outstanding 36 touchdowns and just two interceptions.

It is probably fair to say the winner of this game will be given a spot in the College Football Playoff.

The SEC Championship game will kickoff on Saturday at 3 p.m. on CBS.

Both teams had a different level of difficulty reaching this game. Northwestern handled the West part of the Big 10 conference with an 8-1 record, as three teams tied for second place behind them with a record of 5-4. Ohio State recently defeated then-ranked No. 4 Michigan to tie at 8-1 in conference play, as the Buckeyes’ were given the spot in the conference championship game as they won the tiebreaker with the win.

The big matchup in this game will be the Buckeyes’ high-powered offense that averages 43.3 points per game against the Wildcats’ defense that has limited its opponents to an average of 21.7 points per game.

Northwestern is led by senior Clayton Thorson, who threw for 2,675 yards on 251 completions in the regular season. Thorson threw for 14 touchdowns but has also shown he is prone to making bad decisions, as he threw 12 interceptions. He will need to be on his game and make good decisions throwing the ball if Northwestern is going to upset Ohio State.

Northwestern’s good defense will be tested as they will face a big challenge against the talented backfield of Ohio State’s offense. Sophomore quarterback Dwayne Haskins threw for 4,003 yards on 313 completions, as well as throwing 41 touchdowns this season. Sophomore running back J.K. Robbins accumulated 961 yards on 206 carries, finding the end zone eight times.

If Ohio State wins, they could be given a spot in the College Football Playoff depending on how the other conference championship games turn out. Northwestern will be going for the Big 10 trophy and an upset victory over the powerhouse program of Ohio State.

The Big 10 championship game will kickoff on Saturday at 7 p.m. on FOX. 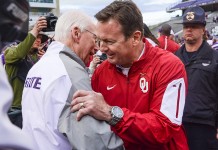