The stage is set for the Big 12 Championship game as the regular season ended on Saturday. Oklahoma will get a shot at redemption against Texas with a shot for the College Football Playoff on the line.

The former LSU coach has not coached since 2016 and it will be interesting to see if he can turn around the struggling program. First, it’s time to enjoy the basketball season, finally.

Texas Tech was defeated 35-24 by Baylor last week, failing to become bowl eligible and losing its fifth straight game after a 5-2 start to the season.

Head coach Kliff Kingsbury was relieved of his duties shortly after the game and a replacement has not yet been announced.

The Wildcats fell one game short of bowl eligibility after a devastating 42-38 loss to Iowa State in Ames, Iowa, on Saturday.

K-State was 0-5 on the road this season.

Head coach Bill Snyder’s future at Kansas State has been a common topic in the final weeks of the season, but there has yet to be an announcement as to whether or not he will return.

K-State has a slim chance of making a bowl game with only five wins but will need Oklahoma to make the playoff and a lack of bowl eligible teams across the country.

Oklahoma State had a roller coaster of a season, winning just three Big 12 games, yet is bowl eligible even with the 31-24 loss to TCU on Saturday.

Despite defeating West Virginia and Texas and losing to Oklahoma by just one point, Oklahoma State dropped games to Iowa State, Baylor and Kansas State.

TCU struggled with injuries and suspensions in the second half of the year which really hurt their chances at competing for the Big 12 Championship.

A year after winning just one game, Baylor capped off a turnaround season with a 35-24 victory over Texas Tech to clinch bowl eligibility.

Iowa State completed a very impressive conference season after a 17-point comeback, 42-38 win over K-State. The Cyclones snapped a 10-game losing streak to the Wildcats with the win.

Freshman quarterback Brock Purdy is clearly the future at Iowa State but if juniors Hakeem Butler and David Montgomery stay Iowa State could be hard to beat next year.

The Cyclones will play Drake at 11 a.m. Saturday as a makeup game from earlier in the season.

The Longhorns clinched a berth in the Big 12 Championship with a 24-17 win at Kansas on Friday.

Texas will face Oklahoma for the Big 12 title in a rematch of the Red River Rivalry on Saturday at 11 a.m. on ABC.

The Mountaineers lost 59-56 to Oklahoma on Friday night, failing to clinch a spot in the Big 12 Championship game.

West Virginia is still in line to receive a very good bowl game despite the loss.

After defeating the Mountaineers, Oklahoma still has a chance to make the College Football Playoff should it beat Texas in the Big 12 title game on Saturday.

Heisman hopeful quarterback Kyler Murray and the Sooners will get a rematch of their 48-45 loss to Texas in the thrilling Red River Rivalry matchup from October.

By the numbers: Setting the scene for K-State versus No. 8 Oklahoma 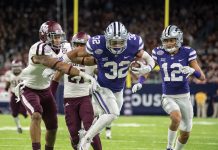