Home Culture Reviews REVIEW: ‘Bridge of Clay’ was well worth the wait

I was first introduced to Markus Zusak when I read “The Book Thief” in middle school, and I fell in love with Liesel Meminger, a young German girl who stole books during the Nazi regime.

It’s been 13 years since the publication of “The Book Thief,” and Zusak finally returned to the literary world in October with “Bridge of Clay.”

“Bridge of Clay” follows the story of the five Dunbar boys. Their father, who left the family after the death of their mother, has returned and is seeking help to build a bridge. Clay, the fourth brother, is the only one who lends his father assistance.

Like many Zusak fans, I eagerly awaited the publication of “Bridge of Clay,” and this novel was worth waiting for. The book offers humor, heartbreak and the full range of human complexity.

First and foremost, I expected to see Zusak’s breathtakingly beautiful writing style in this book, and I was not disappointed. The novel focuses on the obsessions of various characters, and Zusak discusses those obsessions, from Michelangelo to horse racing, in a vivid way.

The novel is told in sections, with two alternating story lines in each section that contribute to the larger narrative arc.

While this is confusing at first, it quickly became a driving force because it kept the long novel (over 500 pages) moving at an enjoyable pace.

What I appreciated most about this novel was how Zusak handled tough situations through humor. This combination of emotional tones was particularly impactful.

For example, the Dunbar boys have a pet mule named Achilles, who features heavily in the scene where they reunite with their father. This made the scene uproarious.

My favorite vignette from “Bridge of Clay” is a flashback to a moment shortly before the boys’ mother passes away from cancer. She takes the boys and her husband to a bar, orders them all beer, and then proceeds to get drunk by drinking the beers that her sons are too young to handle.

This scene is hilarious, particularly through the descriptions of the boys trying the beer, because for many of them it’s their first experience with alcohol. However, the nature of their mother’s illness and the reason behind the trip to the bar offers a sobering lens.

While I am enthralled with this novel, it doesn’t mean that everything about it is perfect. “Bridge of Clay” is a behemoth. It’s messy and there are times it’s hard to follow.

The story has a massive amount of characters and there are things don’t always make sense. Zusak is a big-picture writer who thrives on small details, which can be disconcerting.

However, these flaws are minor when it comes to the book’s artistry. Because while “Bridge of Clay” revolves around Clay literally building a bridge, it’s also a story about what it means to be human, to navigate the complexities of life, grief and relationships.

Reading this book hurts the way a lot of things about life hurt. It’s like a prolonged period of the constant pain from stubbing your toe or the constant heartache of ASPCA advertisements.

I finished this book on a flight from Charlotte, North Carolina to Denver, Colorado during Thanksgiving break. It was an evening flight, the cabin was dim, my seatmates were engrossed in other tasks and I cried.

Because if I learned anything from “Bridge of Clay” it’s that sometimes, life is hard and you just have to cry, even if it’s only because of an incredibly good book. 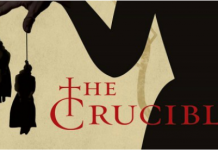