With World AIDS Day on Saturday and the popularity of Bryan Singer’s new movie “Bohemian Rhapsody,” conversations about HIV and AIDS are buzzing.

Living with HIV when it was first noticed by scientists in the 1980s was considered a death sentence, but thanks to advances in science and the mass amounts of research, it is not anymore.

According to the World Health Organization, more than 39 million people have died from HIV or AIDS-related illnesses out of roughly 76 million who have been diagnosed since the infection was first found. However, since the cocktail of drugs that helps HIV-infected people has been condensed into one or two pills, living with HIV is possible.

Kevin Stilley has lived with HIV since his diagnosis in 1985, although he has been an activist, fundraiser and supporter of spreading information about HIV/AIDS to help end stigmas that surround it since before being diagnosed.

The two most common stigmas that come with the disease are the ideas that were disproven long ago, yet are still believed.

One stigma about HIV is that only people in the gay community can contract the disease, Stilley said. This specific misconception arose when the disease ran rampant through the community before all the modes of transmission, like breast milk or dirty needle-sharing, were known.

“I’d like to see the stigmas disappear,” Stilley said. “The best way to get rid of the stigma is somehow, someway we need to educate people. There are still people who are afraid you can catch it casually—it just doesn’t work that way.”

Over the past three decades, developments in research covering HIV and AIDS has made living with the disease possible. Currently, for the first time in history, over half of the people diagnosed with HIV are receiving treatment.

Sara Weckhorst, Kansas State alumna, is a social worker for the Kansas Department of Health, where she helps newly affected HIV-positive people all over the state set up appointments, go to doctors’ offices, obtain medicine, set up housing and eventually live with the disease.

“The [LGBT] community as a whole should know that just because somebody’s HIV-positive doesn’t mean that they’re going to die or that their life is going to be cut short,” Weckhorst said.

In her year-and-a-half on the job, Weckhorst said she has seen over 50 newly diagnosed clients, all of whom tested positive in Kansas. Of those people only one has actually died from “specific HIV-related opportunistic infections.”

Weckhorst said she wants everyone to help fight the stigmas that come with being diagnosed HIV-positive.

While gay and bisexual men account for over 65 percent of all HIV diagnoses in America, it is still a disease that heterosexuals, both male and female, can contract through more than just sex.

The first step to living with HIV is to test for it. Here in Manhattan, testing is available at the Riley County Health Department and Planned Parenthood, or by buying a home-test kit or going to a primary care physician.

“If you’re sexually active, get tested,” Stilley said, “Know your status. Get educated and know about this disease.”

One way to get educated is at an AIDS memorial service on World Aids Day on Saturday at First Congregational Church on the corner of Juliette and Poyntz Avenue at 6 p.m. 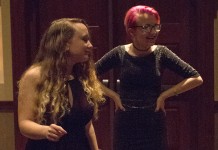