As the smell of coffee, waffles and the sound of Christmas carols filled the K-State Student Union, students were able to take a break from the overwhelming amount of stress that dead week and finals week can bring.

Aubrey Koontz, sophomore in interior design and co-planner of the event, said that the impact these events have on students is rewarding.

“My favorite part is just seeing how excited people are,” Koontz said. “It excites me a lot when I’m able to lighten someone’s day, especially during finals… We spend months prepping an event like this, so it’s just really nice to see all the people who enjoy the events.”

Koontz said the de-stressing events are considered some of UPC’s classic and most popular events of the year.

“The Destresser is kind of nice because it’s in the union and it’s during a week a lot of people are here,” Koontz said.

Five of the 10 committees within UPC came together to make the Destressing event possible.

“It’s a lot of brainstorming,” Kennady King, sophomore in business, said. “There was a lot of communication for this particular event, because there are a lot of committees involved.”

Hayley Boden, junior in chemical engineering, said she heard about the event via a social media post and that the event was a good way to relax during dead week.

“There was music and food which gave a relaxing atmosphere,” Boden said. “I heard about it from a friend who posted it on social media and we wanted to see what was there and get some free coffee.” 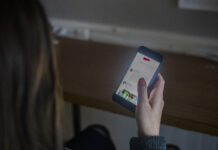 Bringing Coachella to Kansas: Meet one of the acts for UPC’s...