Looking for something to do this Saturday evening? Want to learn how to beatbox? Cadence A Cappella has got you covered.

Cadence will be holding their annual winter concert Saturday. Sterling Oliver, senior in theatre and music director for Cadence, said the audience can expect an evening of fun and hilarity.

“We pride ourselves on not taking [ourselves] too seriously; it’s Cadence’s signature … charm,” Oliver said. “We don’t have a very long set list this year: a few holiday tunes, plenty of Disney, some classics, Panic! at the Disco, Sinatra.”

Cadence will also perform “The Lion Sleeps Tonight,” the group’s signature anthem that is performed at every gig.

Cadence, Kansas State’s all-male a cappella choir, just celebrated its 20th anniversary last year and traveled to compete in the International Championship of Collegiate A Cappella Southwest Quarterfinal in Lincoln, Nebraska, for the very first time.

Nils Peterson, senior in computer science and social media chair for Cadence, said traveling for the ICCA was a great experience for the group.

“It was really cool to see people that are into music and a cappella in the same place, and be psyched about the same things together,” Peterson said.

Peterson will be one of the members helping lead an interactive beatboxing workshop for the audience at their concert.

After spending four years with the group, serving as business manager and president in previous years, Peterson will say goodbye to the group when he graduates this spring.

“I’m gonna miss having the opportunity to sing with so many of my peers and being able to really easily connect with so many people that have the same goals of continuing to sing and doing so in such a fun environment,” Peterson said.

Cadence’s Winter Concert will be held in the Mark. A Chapman Theatre in Nichols Hall at 7:30 p.m. Audacity A Cappella will open the show. Tickets are $7 at the door. 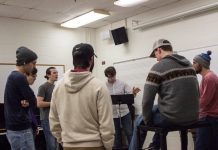 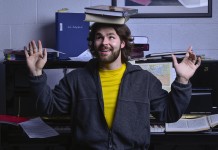 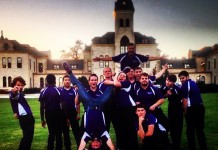 Men of Cadence sing to their own tune