Nichols Hall, once home to the music department at Kansas State, went up in flames 50 years ago. And as the legend goes, the only surviving piece of sheet music was “The Wabash Cannonball.”

Whether you believe that story or not, it’s undeniable that the Wabash — the song, the dance, the Wildcat tradition — has brought K-Staters closer together since the Nichols fire of 1968.

1. They make every game day fun

Let’s face it, the Wildcats don’t always play their best. But as my mom says, “The band always wins.”

No matter what you’re seeing on the field, the marching band will always have a hearty rendition of the Wabash queued up to brighten your spirits a little, even if you’re ugly crying over a bad call. Plus, they absolutely deliver at halftime — they won a Sudler Trophy for a reason.

2. Band members learn so much

K-State is an educational institution, of course, but there’s more to learning than filling in circles on a Scantron sheet. I think there are plenty of life lessons to be learned in a band.

Members of the marching band learn to work in sync with other people, form unlikely friendships, be responsible for themselves and others and manage their time wisely. It’s a team-building exercise most employers could only dream of.

Learning to play an instrument also gives band kids a lifetime hobby, and the fantastic workout for the calves is a nice bonus, too.

3. No university is complete without a band

One of my favorite quotes is “music is what we add to make everything better.” Whether it’s a sporting event, a homecoming parade or even just a night at the bar, the band is there to make some noise and get people clapping.

If you don’t believe me, just try to imagine a K-State game day without any music at all. No Wabash, no halftime show, not even music on the loudspeakers. Nothing but clapping, people swearing at referees and the occasional awkward silence broken up by the sound of a single person coughing. I can’t imagine anything worse.

4. They help us look good

Helmet hats and purple feathers might seem like an odd choice for headwear, but no one wears it like the Pride of Wildcat Land does. From that perfect shade of royal purple to the polished black shoes, they dress from head to toe in pure school spirit several times a month.

It’s a good look in front of all the cameras and rival fans, and personally, it’s hard not to feel proud of where I’m at when I see all those guys and gals playing the Wabash in their funky outfits. That takes confidence.

5. The band inspires students to be greater

The best thing about the K-State marching band is how it embodies our school’s spirit of community and character.

At just about every single sporting event the K-State band attends, they stay until the very end. Leaving because the Wildcats are getting slaughtered isn’t an option for them, and knowing the band members that I do, I doubt that thought would even cross their minds.

I haven’t met every member of the marching band personally, but as a musician myself, I know that there are dozens upon dozens of damn fine people who endure bad weather and truly insane schedules just to make some noise for their school. They might seem crazy, but they play a good Wabash. 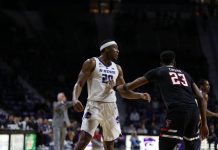 Men’s basketball takes down No. 14 Texas Tech, remains at top of Big 12 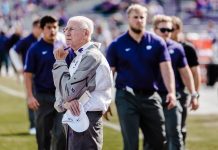 Letter: K-State would be nothing without Coach Snyder