Three-point shooting had been a struggle for the Kansas State men’s basketball team this season. Head coach Bruce Weber and players continued to say it was something that would come around eventually. This team has spent hours in the gym this season working on form, trying to turn that part of this season around.

On Saturday, in a 71-59 win over Georgia State, the tables seemed to turn for the Wildcats as their three-pointers began to fall.

Of the Wildcats’ 71 points, 36 of those points came from three-pointers.

“We put a lot of time these last two weeks into shooting,” Weber said. “Obviously, it payed off. Hopefully we will continue to shoot the ball well.”

The season high of 12 three-pointers came at a very good time for the Wildcats, as they were able to score them in crucial moments of the game.

Brown spoke on the team’s success on the season-high three-pointers.

“We talked a lot this week about making the extra pass to each other,” Brown said. “Tonight, it wasn’t about taking a contested three-point shot, it was just about finding the open man. To keep swinging the ball, making the defense rotate. We did that tonight, which resulted in open three-pointers.”

Brown, who tied with senior guard Kamau Stokes for the team high with four three-pointers, said he was feeling good from beyond the arc tonight.

“We were in the gym a lot this week doing a lot of form shooting just trying to get our form and mentality back,” Brown said. “That sure seemed to help everybody make shots today.”

It will be interesting to see if the Wildcats can continue the successful shooting from three-point land against Southern Mississippi on Wednesday after such a successful run against Georgia State. 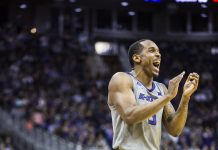 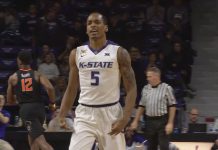 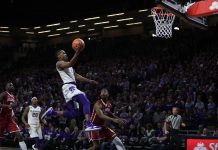 Channel 8: Barry Brown declares for NBA Draft, did not hire...