Home Community Opinion OP-ED: What Gillette gets wrong in its controversial ad

Last week, we looked at what the Gillette razor company got right in its controversial “The Best Men Can Be” advertisement. Now, here’s where the company made a few missteps.

Alfred Edmond Jr., a writer from The Black Enterprise, used the analogy of algebra to show where Gillette went wrong: we sometimes know the right answer to a problem, but not exactly how to get there.

Likewise, Gillette is making valid points about how our culture’s conception of masculinity has been perverted, but it does so in a way that neglects the sensitivities of communicating with men.

Some may object that the truth is tough and men need to hear it, which I don’t dispute, but our goal should be twofold: we should strive toward discovering the truth and sharing it in a way that encourages others to embrace it.

That’s part of being a competent communicator, and it shows that we’re applying the same level of emotional intelligence we want from men. After all, why should anyone listen to us if we’re being hypocritical?

In the words of English comedian Stephen Fry, “I believe one of the greatest human failings is to prefer to be right than to be effective.”

To understand my critique of Gillette’s ad, we need to understand the crisis of masculinity and how it has polarized society. Feminist scholars like Christina Hoff Sommers argue that the emphasis we have placed on the progression of women, which is certainly good, has been implemented in a way that has come at the expense of men.

I am not saying that the progress of women is a zero-sum game where men necessarily lose and is therefore bad. True feminism, I and others contend, is about the equal value of men and women, how their interests and dreams are not more or less legitimate based on their sex. The systems of patriarchy and toxic masculinity (and femininity) are indicative of a perversion of our proper relationship to one another.

However, there are all sorts of ways, including in higher education, where men have been left behind in some way.

I know of some radicals who claim that, while it is unfortunate that men have fallen through the cracks in some areas, it is a “necessary evil” for the promotion of women, or the problems of men are simply not their concern.

In the process, for many men, the feminist outlook is perceived as a hostile critique of them, a delegitimization of their being, which shatters a coherent sense of masculinity and belonging. Consider how often “fragile masculinity” is met with laughter in popular culture, when in reality, it can be a serious psychological crisis for men.

To quote psychologist R. F. Levant: “For the past two decades, men of this generation have had the experience of attempting to fulfill the requirements of the masculine mandate in the midst of a rising crescendo of criticism. Men feel that they are being told that what they have been trying to accomplish is irrelevant in today’s world. … The net result of this for many men is a loss of self-esteem and an unnerving sense of uncertainty about what it means to be a man.”

We, as a society, have a negativity bias where we are more keen on seeing the worst in people and movements. Such a phenomenon is tragic for feminists who are fighting every day to better the lives of women and men alike, and who believe in their equal legitimacy and concern.

Now, this backdrop allows me to make my case clear.

Gillette’s advertisement was released into a culture that is deeply divided and wounded, where our ability to rationally and meaningfully communicate has diminished, and toward a demographic that feels largely ignored and discouraged.

Aesthetically speaking, the colors in this commercial are much brighter and more vibrant, while the new advertisement is muted and much darker. The 1989 ad shows men at their best, competing in Wall Street and sports, loving their wives, caring for their children and excelling overall.

If anything, a new ad for this generation should have been more inclusive with men who have interests beyond sports — the 1989 ad feels like a Sports Illustrated commercial, but that’s beside the point. The new ad has a much more negative tone in comparison to the 1989 one, which creates the impression of criticism and hostility.

Some may respond that Gillette’s ad is encouraging and doesn’t just focus on preaching at men — and that’s true. There are clips of men hugging their daughters and walking alongside their sons, but they are all in the context of “responding to a negative.” They aren’t necessarily positive in the sense that they stand alone as a statement of, “This is what’s good about men.”

Gillette could have been more intimate with a father and son character at the center: the father is teaching his son about what to avoid, and then the father shows what is good about being a man and fulfilling your role to honor your wife, marriage and life pursuits. That duality would have avoided coming off so preachy and instead as loving guidance. Even the father figure in the 2019 commercial is represented at one point as a mindless drone contributing to the problem.

All in all, Gillette should have been more attuned to the crisis of masculinity and our polarized society. They should have found a more effective avenue to communicate their indelibly important message to all men about what the best in us looks like.

OP-ED: The Jonas Brothers getting back together is the best thing to happen this year 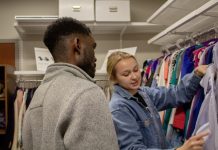