Ever since he was a young teenager, Kansas State University president Richard Myers has had a love for motor vehicles of all types and sizes, but motorcycles are especially close to his heart.

This passion began during high school. A friend of Myers’ had a Ducati motocross bike that Myers occasionally enjoyed the thrill of riding around on. Once it was time to head to college, Myers’ friend loaned the motocross bike to him.

“I rode the bike all around K-State,” Myers said. “I can remember riding the bike down to pick my wife up from her parents’ house on Bertrand Street. Looking back, I can’t believe they let her on that bike with me.”

Myers said the bike was a one-seater, so his wife, Mary Jo Myers, had to sit sideways in order to ride alongside him.

After graduating from K-State in 1964, Myers and his wife moved to Tucson, Arizona, where he purchased his first bike of his own: a Honda 305 straight-twin motorcycle.

President Myers has a new purple ride. Have you hitched a ride yet?

“My wife didn’t really care for motorcycles unless we were going to get food or go shopping,” Myers said. “But that Honda 305, [she] wanted to learn how to ride it.”

Myers went on to teach his wife how to ride the Honda 305, and that bike became one of their go-to vehicles up until their move to Thailand during Myers’ active duty tour in the U.S. military.

Upon arriving in Thailand, Myers bought a small 150-200cc motorcycle to be used for daily transportation.

“There were some guys that were leaving as I was arriving in Thailand,” Myers said. “I bought the bike used, but unfortunately it was stolen several days later; I didn’t have it for very long.”

Myers was then stationed in Japan after Thailand. Following Japan, Myers came back to the United States where he, his wife and his two daughters were living in Las Vegas.

Myers said he got special discounts for being in the military, so he shipped a Honda 500cc four-cylinder motorcycle back from Japan. Myers said he has fond memories of riding the bike around Las Vegas with his family.

“There was this pizza shop just down the road from where we lived,” Myers said. “My wife and I would take our two girls, who must’ve been two and one years old at the time, on the bike and ride down the road.”

Looking back, Myers said his family should have used helmets and other protective gear, even for such a short ride.

“I can ensure you will never see me riding around without my full gear on,” Myers said. “Boots, gloves, helmet and all.”

Recently, author Louise Lewis reached out to Myers to be featured in her book, “The Meaning of Life According to Bikers: The Biker Book For Charity.” Myers said when Lewis reached out, there was no doubt he would help her, especially since it was for charity.

The book was published last September and features stories from motorcycle riders across the U.S., including Jillian Michaels and other celebrities, politicians and former military generals like Myers.

Myers has been involved with multiple biker events, including K-State football’s Harley Day, where he has ridden around the inside of Bill Snyder Family Stadium four times, and has also been a part of the Rolling Thunder Inc. ride in Washington D.C.

The Rolling Thunder ride starts in front of the Pentagon and goes down to the Vietnam Veterans Memorial Wall. The ride is known as the “Ride for Freedom,” and honors service members who have died in action. Myers has had the honor of riding in it five times.

“Sadly, this is the last year for the Rolling Thunder ride,” says Myers. “If I receive my invitation, there is no doubt that I will be making that ride this Memorial Day.”

Rolling Thunder has hosted a ride for 32 years. The non-profit group cites escalating costs, a lack of cooperation from metropolitan police officers and increased Pentagon security for the reason the annual ride is ending. Though the national ride will not occur, regional chapters can still organize rides in other cities.

The national events are exciting, Myers said, but riding a motorcycle is a type of relaxation for him. 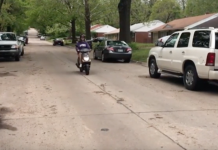 Channel 8: Here are some moped safety tips before you take your next ride 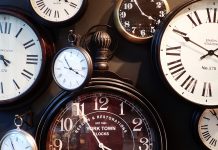 Channel 8: Here are some moped safety tips before you take...