Home News “And the answer is…”: Weekly trivia at Arrow draws a crowd

“What is the smallest mammal by mass in the world?”

“What was Mater from ‘Cars’ known for?”

Over 30 people turned out at Arrow Coffee Co. on Thursday night, and not just to get a beverage. Instead, they created groups to test their trivia knowledge.

“I was looking for something to do,” said Brandon Jansen, a Kansas State alumnus.

Jansen used to play trivia in the dorms when he was was in college. He brought his friends to try something new and have fun.

The rules are everyone must have a team name, no one can search for the answers on their phones, participants must write it with their dry erase marker on their sheet pan and if you get it right, you get a point. The team with the most points at the end wins an Arrow gift card.

Arrow employees Blake Correll and Kristian Guenther were the hosts of the event.

“I love trivia. It’s really fun, and it just gets people together and thinking,” Guenther said.

Arrow started doing trivia nights about three years ago when a previous marketing coordinator wanted to do a trivia night as a way to bring the community together. the original idea involved partnering with various organizations for questions.

“We partner with organizations most of the time, so it is a way to give back to the community and have fun doing it,” said Correll.

On a cold night, the event still drew a large crowd. Usually, the event averages 15 to 20 people.

Trivia night consists of questions from subjects that the host picks each week. Every night is different. Sometimes, there are specific themes like “Seinfeld,” “The Office” or “Parks and Rec.” Arrow plans on continuing themed trivia nights. However, some weeks the questions are seemingly random.

This Thursday, some of the subjects included orchestra equipment, February facts, and the movie “Cars.”

“Our audience is generally young, so like college students or post-college students. So, we have to cater to what they would know without giving it away,” Guenther said.

As the night came to a close, the winning team was “Nobel Gas” with 42 points. The Collegian ended up playing along and finished in dead last with six points.

“You can invite anyone, and it is just super relaxed and casual,” Guenther said.

Trivia night starts at 7 p.m. every Thursday and usually lasts an hour. 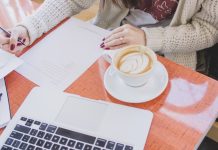 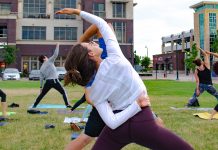 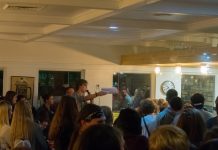