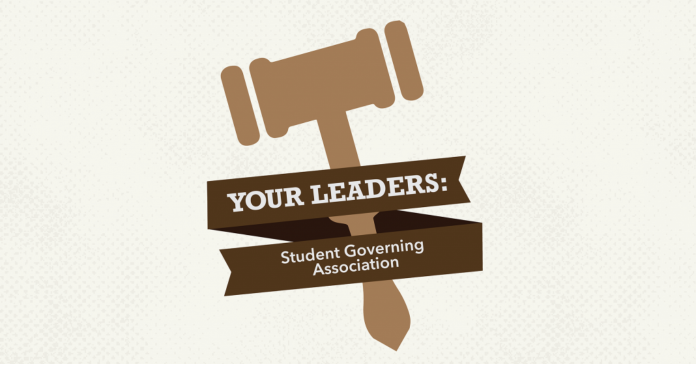 In the form of an on-campus allocation, student senate heard the funding request of Alpha Gamma Rho fraternity to host their Ag Symposium on Feb. 22. Many agricultural professionals will be there, including Casey Neimann, AgriSync creator, Kevin Heikes, agricultural business expert, and Chris Brandt, Kansas State University aerospace engineering graduate.

There was minor debate on the merit of allocating funds to Alpha Gamma Rho. Some student senators were concerned the Ag Symposium wouldn’t be open to all students.

Nils Bergsten, on-campus allocations committee chair and senior in agribusiness, said this event will have educational purposes and be open to all students, not just agriculture students.

“It is highly encouraged by professors to attend this event,” Lacy Pitts, student body vice president and senior in agricultural economics, said. “A lot of students that aren’t in the ag industry go to this event.”

Nathan Bothwell, SGA intern coordinator and sophomore in political science, also argued for the passage of the allocation.

“This passed committee with an 8-0-0 recommendation,” Bothwell said. “If there were reasons to not pass the bill, it would have been caught by now. I have faith in the committee. I feel that students in the College of Agriculture deserve to hear and learn from these speakers.”

The bill ultimately passed after 15 minutes or so of debate without objection.

Additionally, Noah Ochsner, SGA intern and freshman in agricultural communications and journalism, presented about the rural divide between students in higher education. The presentation, titled “Addressing the Rural Divide,” focused on students from rural communities and the fact they are at higher risk to drop-out of college strictly due to the high schools they attended.

This is something that does not have a lot research on it, Ochsner said.

The exact number of rural students at K-State is unknown, as the university doesn’t consider these statistics. This is a problem, Ochsner said, because rural students are more likely to drop-out than any other student population, citing a 2016 National Student Clearing House Report.

“By definition from the state of Kansas, Manhattan is a rural community,” Ochsner said. “I disagree with that because Manhattan has a Target.”

The U.S. Census Bureau defines rural as a “less dense, sparse population,” and the University of Kansas Institute for Policy and Research says 25 percent of Kansans live in a rural community.

Ochsner said students from underprivileged schools in an urban setting may have the same problem as in rural schools — lack of opportunities.

Ochsner went on to say that academic coaching, improved access to resources, summer programs and college preparatory courses could reduce the drop-out rate of rural students.

“I received a recommendation when I came to K-State to receive academic coaching because I was considered an ‘at-risk’ student,” Ochsner said. “This is because I was the first person from my area in awhile to attend K-State and pursue my major.”

Ochsner is from Tribune, Kansas, and said his graduating class had 20 students, which he said was a good size for his area. Tribune’s current total population is estimated to be less than 800 people.

“We must continue our work in making education accessible, affordable and attainable,” Ochsner said.

Student senate will reconvene Feb. 14 at 7 p.m. in the Wildcat Chamber. At that meeting, new legislation recommending a decrease to UPC’s allocation by the Privilege Fee Committee is expected.