Home Community Opinion OPINION: Four political myths everybody needs to shut up about

Howdy, stranger. If you’re becoming increasingly annoyed by the misinformation being spread around the political Twitter-sphere as our species throttles through the Information Age like Vin Diesel without a seat belt, then you’ve come to the right place.

I tend to consider myself politically moderate — mostly because I think leaning too far in any philosophical direction is going to lead to radicalized thinking and poor decision-making. Most of my opinions come from listening to scientists and researchers and going with what they suggest, so it’s frustrating to see the same myths get repeated over and over by people across the political spectrum.

With that in mind, here are four common political myths I just wish people would shut up about.

1. The gender pay gap isn’t what people think it is

Much like gender discrimination itself, the gap between the average salaries of male and female workers in the United States — currently, around 18 percent — is a measurable phenomenon with real effects, and denying its existence is completely ridiculous.

That said, a lot of the discourse surrounding the pay gap seems to indicate that many Americans don’t actually understand what the statistic means.

OPINION: Going to the polls, voting in person is a jolly good time

A common line of thinking is that the pay gap shows how women are paid less than men for working the same jobs at the same companies. Even former president Barack Obama espoused this idea throughout the 2010s, including the 2014 State of the Union address, but this is heavily misleading at best.

The key to understanding the pay gap is that it is an average. I always hated math class, so to put it another way, the pay gap is a statistic describing the salary trends of every working person in every career field in the United States.

While it’s honestly quite likely that some women in the country do get paid less than men in the same position at the same company, this practice has been explicitly illegal since 1963 under the Equal Pay Act, which was specifically enacted to combat this issue and amended at least once to increase its effectiveness.

This widespread misunderstanding of statistics among laypeople is upsetting because I feel it distracts us from fighting the real problem. What the pay gap really illustrates is that women are in lower-paying careers than men on average. There are many, many possible reasons for this, and it’s incredibly unlikely that there’s only one cause in reality.

Maybe occupations that are popular with women get less monetary respect than they deserve — teaching, for starters. Maybe women just tend to choose career paths that don’t pay as well, such as social work and nursing, due to personal preferences for that kind of work.

If you ask me, it’s because of the social pressure to conform at a young age and take up “feminine” interests that extend into women’s career choices, careers which are often criminally underpaid — seriously, look up a teacher’s starting salary. Workplace discrimination and “boys’ clubs” don’t help break any boundaries, either.

While gender discrimination is an unfortunate reality in the workplace and likely will be for some time, grossly misunderstanding the pay gap helps no one.

One surprisingly popular viewpoint that frankly embarrasses me is the idea that trans people are all whiny teenagers who are just “faking it” for attention. Sorry, but science says otherwise.

Biologically speaking, one of the most common reasons for someone to have a queer identity — that is, not being straight in some way — is a hormone imbalance in the womb that continues into adulthood, causing the brain to be a little different. For example, some research suggests that a male fetus that doesn’t get the expected amounts of male sex hormones in the womb could end up gay or bisexual, and vice versa for female fetuses in a similar situation.

There are other biological factors involved in queerness, too. Most queer men have index fingers longer than their ring fingers — the opposite of most straight men, but similar to most straight women. This is because the length ratio of your fingers is believed to be strongly linked to testosterone exposure in the womb.

Additionally, some research suggests that men with more older brothers are more likely to be queer. To be specific, the more sons a mother has, the more likely it is that the next one is going to be queer. A likely explanation is that producing and providing male sex hormones for a straight son creates some kind of strain on a mother’s body, making her slightly less capable of providing these hormones with every subsequent son.

To cap it all off, transgenderism specifically is believed to have a basis in prenatal biology. It is often a result of — you guessed it — inconsistent sex hormones in the womb, which can cause transgender people to essentially have a biochemically female brain in a male body, or vice versa. Even as children, the brain activity of trans people is more like their preferred gender identity than anything else.

Hundreds of scientists around the world can’t all be liars. Trans people exist and their identities are as valid and real as yours and mine. To say otherwise is not only scientifically inaccurate, but demonstrably cruel.

I haven’t yet done the research to hold any majorly concrete opinions on the regulation of civilian firearm sales in this country, but this one is just annoying.

One proposal that often comes up when people ask for better gun regulations is the idea to ban “assault weapons” in the United States. This idea sounds nice — I mean, I certainly don’t want to be assaulted by any weapons — but the problem is that it would be a difficult ban to enforce because “assault weapon” is something of a nonsense term.

Assault rifles are universally defined as two-handed firearms capable of switching from fully automatic to semi-automatic firing modes. In other words, assault rifles can shoot really fast when you hold the trigger, or they can shoot a single bullet every time you tap the trigger. They are extremely expensive, illegal to own without a highly selective federal license and outright banned in several U.S. states.

Assault weapons, meanwhile, are a mixed bag that varies in definition from state to state, and even person to person. Some states define them as weapons with a certain kind of grip, and others say they’re weapons within a certain size range. However, the most common definition regarding assault weapons is that they are, essentially, a scary-looking gun with “military-style features.”

OPINION: The lack of K-State snow days is embarrassing and sad

It’s no secret that the AR-15 — the semi-automatic civilian equivalent of the military M16 assault rifle — is a startlingly common sight at American mass shootings, but this is not necessarily because the AR-15 is a vicious assault weapon that’s deadlier than any other civilian rifle. In fact, gun experts have said the reason so many mass shooters use the AR-15 is likely because they’re just copy-catting other mass shooters who had the same weapon.

Functionally, the AR-15 is no different on the inside from, say, the Ruger Mini-14 hunting rifle your grandpa keeps locked in his garage. Both weapons use the same sized bullets, both are semi-automatic and similar in size, and both weapons use magazines for loading bullets — up to 30 per magazine.

Yet no one is calling for the Mini-14 to be banned as an assault weapon, nor is it popular among American psychopaths with murderous intent. Why? Because it’s largely made out of wood. It’s not scary-looking, and thus it’s not an assault weapon.

While I’m at it, consider that only around 3 percent of American gun deaths are caused by rifles, while over 68 percent are caused by handguns. Shouldn’t handguns be the banned assault weapons, then?

I support some form of stricter gun regulation because the U.S. seems to have a uniquely bloody problem on its hands, but it’s incredibly annoying to see champions of gun control demonstrate that they have very little knowledge of the guns they’re trying to control. My advice: if you want gun aficionados to listen to you, try speaking their language first.

This is probably the hottest issue I can think of right now. This should be fun.

President Donald Trump was very insistent on the campaign trail that he was going to spearhead the construction of a physical wall on the U.S.-Mexico border to further discourage illegal immigration. Mexico was supposed to pay for it, but imagine my surprise when it became clear that America would be footing the bill.

I’m sure I’ll be getting some weird, strongly worded emails for this, but border walls aren’t very good at doing their jobs, historically speaking.

To use a famous example, the border wall between East Germany and West Germany in the 20th century was so ineffective at keeping people out that it was eventually torn down around the time the two halves of the country started to reunify, and there are hundreds of personal accounts out there of people crossing the border illegally for various reasons.

Walls can be damaged and blown over by weather, tunneled under without detection and even climbed over with the right equipment. For a variety of practical reasons, a wall seems to only be as effective as the guards behind it. So, on such a large scale, why have the wall at all?

The cost is more enormous than my human brain can comprehend. Trump’s wall is estimated to cost somewhere in the tens of billions in taxpayers’ dollars, possibly as high as $18 billion. Even conservative institutions are finding that a border wall won’t work for numerous economic and practical reasons. Isn’t the point of conservatism to avoid wasteful spending, anyway?

On top of the fact that the wall will be monstrously expensive and not terribly effective at its job even if it’s completed, there’s also an environmental factor to consider. Over two-thirds of the border land is owned by private citizens, state governments and Native American tribes. That’s a lot of red tape.

Plus, any animal species that migrate across the U.S.-Mexico border (terrestrial species especially) are going to have their livelihoods greatly affected by the presence of a wall on their natural habitat. And that’s not even mentioning effects on the soil, wind and even weather that could result from any kind of obstruction on that large of a scale.

I could go on for reasons America doesn’t need any border walls — bad practice in foreign policy, possible racial insensitivity and more — but hopefully a look at the evidence has shown that political myths are more pervasive than we might usually think. Stay vigilant, all of you; the future needs you.

Kyle Hampel is the copy chief and deputy multimedia editor for the Collegian and a senior in English. The views and opinions expressed in this column are those of the author and do not necessarily reflect the official policy or position of the Collegian. Please send comments to opinion@kstatecollegian.com. 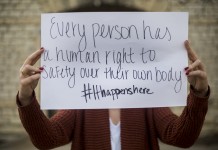