With his retirement only a few months away, Pat Bosco, vice president of student life and dean of students, spoke to students and faculty Thursday in the Leadership Studies Building as part of the Last Lecture series.

All speakers for the Last Lecture series are given the following prompt: If this was your last time speaking to K-State, what would you say?

Bosco had a lot to say about being authentic and genuine. He said it started at his first job as a paper boy.

After five decades of life at K-State, Bosco will retire at the end of the year

“When I was a paper boy, my mom suggested writing my name and home number on a paper to give to the customers if there were problems with the paper,” Bosco said. “If it was wet or late, they would have a direct contact to me.”

That practice followed him through his career — Bosco is famous for giving out his phone number to parents at orientation and enrollment, so if any problems arise, they have a direct way to contact him. He answers calls, texts and emails as quickly as he can.

Bosco also learned some tips from his dad about authenticity, and it started with a boxing lesson.

“I remember being in the pool hall he owned when I was 12,” Bosco said. “It wasn’t busy that day, so my dad asked if I wanted to learn how to box, and I said, ‘Sure.’ After a few minutes, he said, ‘Let’s give up boxing and teach you how to make people like you; let’s learn how to shake hands.'”

Bosco said his dad had a very firm handshake, and his dad told him you can tell a lot about a man by his handshake — you can tell how sincere he is, and if he genuinely is in the moment.

Kansas State University, Bosco said, is built on being genuine and sincere.

“What makes our school special?” Bosco asked. “What causes students to raise money for other students? Why do we have so many donors? Why do our students spend so much time in student publications, in student government, in Panhellenic organizations? They show what makes us special.”

Student leaders, Bosco added, are one reason why K-State succeeds. Bosco himself was student body president when attending K-State, and he said he admires the work done by student leaders today. He added that what makes K-State leaders so great is their authenticity.

Q&A: Bosco discusses being the dean of students, falling in love with K-State

“Authentic leaders are in the moment, and they give everything they’ve got,” Bosco said. “We [the leaders] need to make sure that we listen. We need to not be the smartest in the room. We need to understand that maybe someone else has a better idea and be vulnerable.”

Bosco added that no one is perfect, but he said he believes that at this school, people are pretty close.

“We need to be vulnerable and committed to being better,” Bosco said. “We are that kind of school where we can. We are real and genuine. It shows in our ability to roll up our sleeves and be better.

“When we make mistakes, we need to say we’re sorry right away,” Bosco continued. “I would add that I know psychology and sociology. During my 50 years here, I’ve developed my own study — Boscology, the study of being genuine.”

“My message is to be genuine and better,” Bosco said.

Bosco said a big part of K-State’s legacy is being the first land grant university. It is a legacy of teaching and service which he didn’t understand when he first arrived here, but he does now. There is a culture of diversity and numerous activities planned every week.

“Rodeos and drag shows — where else are you going to find that in America?” Bosco asked. “We have this variety and commitment to culture any given weekend.”

This culture of commitment to being genuine and sincere shows in K-State students, Bosco said, and he wants that to continue.

“I want to make sure that schools of medicine or law or education continue to look at our graduates and think that something is different,” Bosco said. “They have an experience that is singular. They roll up their sleeves and solve problems. They have had an experience in and out of the classroom that singles them out to be different.”

Bosco said K-State is a family bigger than themselves, and students genuinely have a chance to make a difference here.

Bosco will be retiring in July.

William Carter, senior in computer science and member of the Mortar Board Senior Honor Society, said he helped organize the Last Lecture as part of Mortar Board Week 2019.

“We do one lecture a semester, and it gives the speaker a chance to speak about something that they wouldn’t be able to at any other time,” Carter said. “Since Dr. Bosco is retiring, he seemed like a good fit for this one. He also exemplifies our ideals: scholarship, leadership and service.” 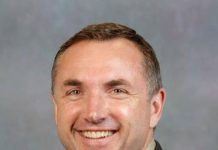 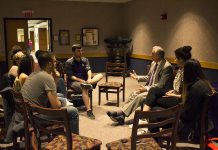