It was a mildly chilly morning in Forum Hall when the A.Q. Miller School of Journalism and Mass Communications hosted the 19th annual Huck Boyd Lecture on Thursday featuring keynote speaker Bonita Gooch, editor-in-chief of the Community Voice newspaper in Wichita.

Gooch also discussed the recent struggle newspaper publishers have had in surviving an increasingly digital America.

“This most recent decline has really been tough on the African-American press,” Gooch said. “Tavis Smiley, who is a black journalist, said that when America gets a cold, black America gets pneumonia. Well, I like to twist his statement around and say, when white newspapers are sick and struggling, black newspapers are almost dead and gone.”

The Community Voice is a 25-year-old biweekly newspaper. Although it started in Wichita, it covers the entire state of Kansas and is distributed in multiple cities, with its target demographic being the black community.

Gooch has been with the publication for 23 years. She said one of the key components to the paper’s success is demonstrating racial pride to strengthen its readership’s sense of community.

“Tell me — or just think, you don’t have to tell me — when you have seen a black boy or black man in your local daily newspaper who wasn’t in a mugshot or who didn’t have some kind of ball in their hand,” Gooch said. “It’s probably rare. I’m not going to say never, but it’s probably rare.”

Gooch said when the Community Voice covers crime, they typically look at it from a “solutions” stand point. She said they want to shine a bright light on the positive things occurring among black Kansans.

Other key concepts Gooch mentioned were informing black readers about things affecting them and how the paper goes about addressing the issues and concerns of the community.

“First we start by trying to explain it to people,” Gooch said. “Sometimes people assume people know too much, and they start in the middle. We always start back at the beginning and bring our audience up to date. We want to make it clear to them why they should be concerned — what does this mean to you? Then we drive home the point that change is possible.”

Gooch said she believes the Community Voice executes this idea well by keeping its eyes and ears open to what is affecting the black community in Kansas. Gooch said their success comes from being in their community and being actively involved in it, and that establishing trust helps them build a following and a sense of loyalty among their readers.

“Our slogan is, ‘A trusted voice from the community perspective,'” Gooch said. “What that means is our readers can trust that we’re telling them things that are important to them and, honestly, what it means to them. It is important to have that level of trust with who your news source is.” 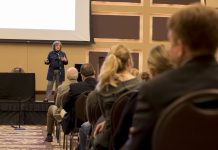 ‘You decide what success looks like’ says ESPN executive