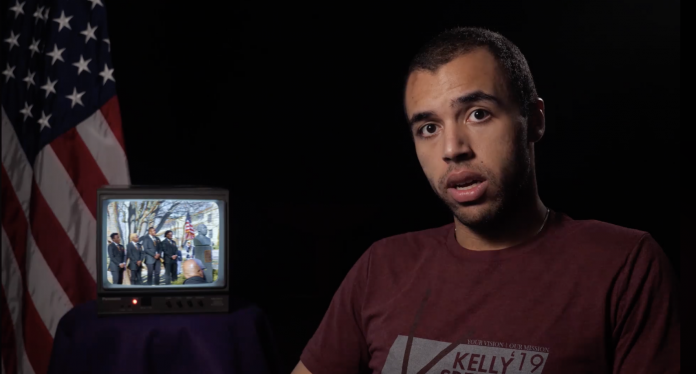 Editor’s note: This story has been updated to include the Jansen Penny campaign’s video response.

In his campaign’s first public comment in a week, Ryan Kelly, speaker of the student senate and junior in communication studies, fired back after his campaign was hit with multiple sanctions following a series of elections hearing for alleged violations of the Student Governing Association elections regulations.

“My name is Ryan Kelly, and I’ve been running for student body president,” Kelly says at the beginning of the video addressing the student body. “Most of you have no idea what Student Governing Association is, or what it does, and more specifically, you probably have no clue what’s going on with our election system over the last few weeks.”

Kelly goes on to explain that his campaign with Anna Spencer, junior in nutritional sciences, has been “hit with violation after violation.” Over the past few weeks of the election, the SGA elections committee found that the Kelly-Spencer campaign had not properly accounted for certain expenses, including video, photography and web development services provided to the campaign free of charge. The campaign was forced to remove all photos and videos not included in the initial expense report.

In the video, Kelly alleges that this amounts to being sanctioned for the same violation.

“The standard that they are holding us to is an unrealistic one that no other campaign in the past five years has been held to,” Kelly said in the video. “This has kept us from having a fair shot in this election. SImply put, this has gutted our campaign. All we have left are t-shirts and stickers.

“Imagine being a part of the system but not understanding the system because every single year, the enforcement of these rules changes. If this is the case, why would any student run for student body president,” Kelly finishes in the video as he leaves the camera frame.

On Wednesday afternoon, Kelly spoke with the Collegian and detailed his reasoning behind the video.

“We made this video to share our experience with the K-State elections system and how frustrating it can be for students,” Kelly said. “It was a statement that our campaign has been riddled with technicalities. What we define as arbitrary lines set by our elections committee. A lot of gray area on these issues, and we need to clarify it for all students moving forward. There’s no student that should go through what we went through.”

The video comes after multiple hearings on elections violations this week for both campaigns. On Tuesday evening, rival candidate Jansen Penny’s campaign was sanctioned for a campaign member’s use of a GroupMe group created to promote Penny’s campaign. The campaign was ordered to delete the GroupMe, and they were ordered to not create a comparable GroupMe for the remainder of the election.

In a response video posted Wednesday afternoon, Penny and running mate Karamali detailed their response to claims against their campaign.

“This election season is not an issue of differences between candidates or being discriminated against,” said Karamli, sophomore in chemical engineering and Penny’s running mate. “Elections are about serving every students’ best interest, and that requires faith. To be a good leader, others must have faith in your team, your mission and your execution.

“Jansen and I have prided ourselves in respecting these positions of authority and have followed their guidelines. We put our faith in them just like you all are putting your faith in us,” Karamali continued.

At Kelly’s last hearing, an SGA adviser opened the meeting by questioning Kelly on a video filmed in his current SGA office. He did not confirm or deny the existence of the video at the meeting or in subsequent questioning. Based on the video, the aforementioned adviser asked if Kelly felt he had been discriminated against in the election process due to his race. Kelly said he did not feel that way.