As sounds from The Temptations, Will Smith and other musicians hummed through speakers, visitors perused the Black History 101 Mobile Museum Friday afternoon in the K-State Alumni Center.

The museum is a collection of over 7,000 black and African-American artifacts and memorabilia — all original — dating as far back as the transatlantic slave trade up to the Black Lives Matter movement.

“I actually use the artifacts as an entry point with this discussion,” Khalid el-Hakim, the museum’s founder, said. “You’ll see some of the material on display is very offensive, very disturbing but I think having those things on display and being honest about it helps us to understand the true contributions of somebody like a Martin Luther King or Rosa Parks.”

Photographs of white people watching hangings of black people; a Disney book naming a black baby character “tar baby;” and many autographed records, notes, portraits and bulletins were among the items on display.

El-Hakim is an educator who has spent 28 years collecting artifacts and answered questions from visitors at the exhibition. He began sharing his collections as a middle school history teacher in his hometown of Detroit from 1995-2011, where he used artifacts in his classroom teaching.

“Initially I was just picking up artifacts for my own personal reasons, but in 1995 I went to the Million Man March, which was a call for black men to come to D.C. under the themes of atonement, reconciliation and responsibility,” el-Hakim said. “I was inspired to take this private collection and start sharing it in public spaces.”

The mobile museum is in the middle of its national tour, having already made 33 stops in 15 states.

A few main messages are hopefully communicated through the exhibit, el-Hakim said.

“First and foremost, I want them to get a sense of the diverse ways that African Americans have responded to racism in America, that it’s been a prolonged struggle,” el-Hakim said.

“I want people to see that understanding history is valuable, that it provides opportunity to have honest conversations about race,” el-Hakim said. “Hopefully it reminds us that the struggle continues, and there were people before us who sacrificed their lives to try and make this country a better country and world a better world.”

Unlike a regular museum, there were no descriptions or labels paired with the artifacts.

The idea behind this is to allow people to experience the artifacts and then inquire about them.

“Different things resonate with different people. Whatever resonates with you deeply, you’re going to go out and research that on your own,” el-Hakim said.

Natalie Rice, junior in biochemistry, attended the event for a class assignment and reflected on her impression of the artifacts.

One artifact that stood out in particular to Rice was a sign discouraging people from listening to music made by black artists. She said it was thought-provoking to see how skewed the message was.

“It was really a good thing to have something like this on campus for a lot of kids who definitely haven’t been exposed to this,” Rice said.

In conjunction with the exhibit, el-Hakim presented his lecture “The Truth Hurts: Black History, Honesty, and Healing the Racial Divide” later Friday evening. 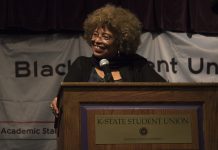