Home Newsletter Recap OPINION: Don’t destroy the US in 2020, polarization helps no one

The 2020 U.S. presidential election is right at our doorstep, and we already have fertile soil for polarization.

Debates on abortion, religious freedom, universal healthcare and economic policy are bound to ignite passions. Everyone is fed up with the old and ready for the new.

I am sure the Democrats in 2020 will be mobilized and prepared for Republican backlash. The stakes are too high and the need for justice is too ripe. They will never let 2016 happen again.

On the other end, Republicans have a tough battle. Rising numbers of people are dissatisfied with capitalism and desire universal health care. To survive this onslaught, Republicans will have to inspire the American people with proposals that reinvigorate pride in our country.

But before the battle begins, I am making a plea to all sides: do not destroy America.

If we are striving for a just and free society, then we must first have a society. To accomplish this, we need to examine ourselves and expose the myths we’ve adopted.

OPINION: Trump's tenure in office is worth frustration, not panic

We need to surrender the myth of radical individualism or the pervasive “me” ideology which says, “My vision of justice, my politics and my life are my utmost concerns above cooperation, compromise and community!”

Most people who hold this view often don’t even know it, and from my experience, are immune to evidence of their arrogance. People with this mentality will generally scoff at the idea of societal duty and belittle the idea of cooperation. And though I vehemently disagree with the “me” view, I understand why it is held.

We live in a disenchanted age. Many of the traditional institutions that maintained civil society have deteriorated or entered vicious cycles of corruption — religion, government and so forth. These were once places people found trust and, for some, identity and fulfillment.

With their decline has emerged what some scholars call the inward generation. Professor Jeffrey K. Hadden found that this was the best way to characterize our current generation.

Hadden’s article, written in 1970, says, “It is the generation which gives absolute priority to the personal and which tends in a remarkable way to withdraw into the self. This might seem surprising for those who are thinking of our youth in terms of highly activistic, protest-sign­ carrying people, who have their teach-ins, sit-ins, walk-ins and stay-ins all over the country and who think in many terms about themselves except one: inwardness. But first impressions are not always the right ones.”

The inward generation wants to meaningfully change the world, but they know the odds against them are incredible. Due to their lack of trust in others and traditional modes of civil discourse, they collapse into themselves. Cooperation and compromise are considered self-demoralizing. They present themselves as confidently pursuing a better world, even though they are plagued with severe doubts.

On the other hand, some of us have grown numb to politics. We remain silent out of fear, hoping the drama will pass. But we recognize that our silence maintains the status quo. In this state, some become cynical, others pursue fun and excitement, but the result is the same — civil society is forgotten.

It is time to break the spell and take responsibility.

Our democratic republic and communities are structured so that decisions and actions have far-reaching consequences. The “me” ideology pretends that we occupy microcosms invincible to outside forces.

In this day and age, however, we simply cannot be left alone. With the rise of globalization and an ever more diverse society, we must confront every lens of identity and social problems.

We must also recognize the “me” mentality subverts its own goals. If you want to pursue your life plans in peace, then one must acknowledge peace is an internal and external reality. Your joy and fulfillment are not just what you feel and do for yourself; they are greatly affected by your relationship with others.

People are at peace when they trust their neighbors, when they see virtue and goodness in their country. When their trust is violated, when people hide their faces and espouse hatred, when someone feels overlooked and unheard, everyone’s peace is robbed. Laws will be passed, rumors will spread and our flourishing will be endangered.

The journey forward will not be easy. In fact, it will be painful and, at times, disheartening. But there will be moments so bright that they restore hope. It sounds dramatic, but is there really another way to describe it?

Undergirding our political opinions are controversial views of human nature, the role of government, and the nature of morality. Whether or not we realize it, we are in a discourse of cosmic proportions.

The only way we will rebuild is if there are signs of hope. When we cherish the pursuit of truth and see the human being behind the differing viewpoint, there will be hope. People won’t be so afraid, intimidated or pessimistic. There will be hope, no matter how small, of friendship and reconciliation.

So, here are some ground rules. Do not interrupt someone when they are speaking. Ask clarifying questions more often than you propose your ideas. Understand the person’s story and how they view the world. Respect the gravity of the topic. Acknowledge points of agreement.

Control your immediate impulses to scoff or yell. Be conscientious of your nonverbal communication. Befriend an intelligent and kind person with whom you disagree. Acknowledge your fallibility. And most importantly, go into discussions with the desire to learn, not to win.

If we follow these rules, I think we can make real progress. People don’t want to compromise and work together when they’re afraid, so let us mend old wounds.

When I became an American citizen during the 2016 election, some people told me I was making a mistake. I told them, “I believe in this country. I believe in its people.” And I still do. 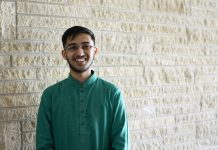 OPINION: Gen Z should lead the fight against rising trend of global nationalism