Home Culture Feature Freshman Jonah Evarts has self-published not one, but two novels in the...

Not many 18 year olds can say they have written and published a book. Jonah Evarts, freshman in humanities, however, has already accomplished this twice.

“I’ve always had an affinity for writing and since I was a child I’ve been using it as an outlet for any creativity in my head,” Evarts said.

Evarts started writing his first book at the age of 15, near the end of his sophomore year of high school. The debut novel, entitled “Semitara,” published last spring.

“I got the idea for the concept of the book from a variety of fantasy books that I’d read,” Evarts said. “I wanted to make the world as unique as possible, so I added a romantic aspect to the story that was a central part of the narrative.”

“Semitara” received overwhelming positive feedback, which Evarts said was surreal and left him speechless. A fan even named his puppy after one of Evarts’ characters.

“I actually teared up a little when I heard that because it meant my work was truly going to live on,” Evarts said.

Shannon Skelton, assistant professor of theatre, said Evarts has fans from all over, himself included.

“There is a guy in the South who cosplays as Jonah’s characters,” Skelton said. “As a fan of science fiction and fantasy myself, I am so impressed with what Jonah has been able to accomplish and I cannot wait for the next worlds and characters he will create.”

OPINION: I read over 60 books this semester. It was wild, and here’s why.

“I’m incredibly excited because I feel like this is my best writing to date, and it’s a very personal book,” Evarts said. “I started writing it last September, when I had quite a bit going on in life and needed a way to vent some of it off. The book was originally just my own personal journal for therapeutic writing, but then one day I decided it could truly turn into something amazing if I chose to take it that direction.”

The revenue generated from Evarts’ first month of sales for “The Worst Kind of Love” will be donated to The Trevor Project, a non-profit organization that provides crisis intervention and focuses on suicide prevention efforts for LGBTQ youth.

“I chose to include LGBTQ characters in the story and I am a straight white man,” Evarts said. “I didn’t want it to be yet another straight white person taking that community and using it for their story when there are plenty of talented individuals from within that community itself that deserve to tell those stories. Regardless, I wanted to include LGBTQ themes in my book, and I felt that if I was going to do that, I should be feeding back to them.”

Evarts has two published works under his belt, but said he doesn’t plan to stop anytime soon.

“I have a constant creative faucet in my head that won’t shut off,” Evarts said. “Almost everyday I see something or hear something that sparks a creative scenario in my head, and I have the urge to turn that into something tangible. I have entire notebooks filled with different ideas that I plan on creating into some form of expression at some point in my life.”

Manhattan responds to ban on books 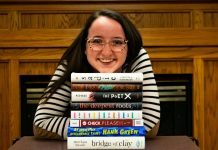 OPINION: I read over 60 books this semester. It was wild, and here’s why.

On the calendar: September KSBN events