Sexual assault survivors shared their stories at the second annual NO MORE Resource and Empowerment Rally in the K-State Student Union Courtyard on Wednesday.

The event was in collaboration with NO MORE, a national public awareness campaign dedicated to ending sexual assault and domestic violence.

President Richard Myers opened the event by addressing the survivors who spoke out about their experiences.

“Sexual assault is a pressing problem across the country and unfortunately here at Kansas State as well,” Myers said. “This issue is something we absolutely have to take seriously. We want to change the dynamic surrounding sexual violence, and to do that we have to learn. We have to do better.”

Paige Eichkorn, president of Wildcats Against Sexual Violence and junior in mass communications, read a survivor testimonial that struck a personal chord with her because it was strikingly similar to her own sexual assault experience.

“After my sexual assault, I quickly learned the victim blaming every survivor goes through when they tell someone,” Eichkorn said. “We’re told to report these crimes as soon as possible and get help, but speaking up is made entirely too difficult by our culture that has taught us to disbelieve victims when they come forward.”

A main theme of the rally was to promote conversation and support survivors.

“Understanding that people here have a story and listening to them is the most important part,” Gosselin said. “Sexual assault is an issue that doesn’t discriminate, and educating yourself is key to advocating and tearing down the meaningless stigmas surrounding this issue in our society.” 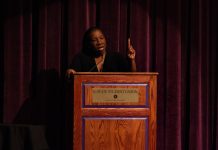 Tarana Burke tells the story behind the #MeToo movement