“Captain Marvel” has a balance in action, humor and exposition, setting the scene for putting yet another marvelous show on the big screen.

Directed by Anna Boden and Ryan Fleck, this film is the first of the Marvel franchise to feature a female superhero’s origin story. Needless to say expectations were high: not only did the film introduce a new character to the Marvel Comic Universe, but had to lay out her origin story while tying it into the current timeline set up by previous movies.

Captain Marvel, played by Brie Larson, goes by many names in the film, as she and those around her are attempting to find her identity. The film takes place in the ’90s, when intergalactic circumstances bring the her to Earth, in hopes of connecting memories together.

One of my favorite parts of the film was the light-hearted comedy of then-two-eyed Nick Fury, especially with the variety of characters (including different species). To see the Shield agent in a lower-powered state brings out his wits and creativity.

“Captain Marvel” also demonstrates a change in power dynamics. Empowerment for many previous superheroes has been given to them, and then the characters must realize their own potential. However, Captain Marvel’s focus is more about empowering oneself. This empowerment allows perspective of control surrounding the difficulties the hero faces.

Those watching the movie to prepare for “Avengers: Endgame” will pleased with the plot, which prepares viewers for more action within the Marvel movies.

However, not everyone may have had the patience to appreciate such a movie hitting all the right notes. Because Captain Marvel was mentioned in “Avengers: Infinity War,” many viewers may spend the movie tapping their foot in anticipation of scenes near or after the credits that would connect the story with the upcoming movie “Avengers: Endgame.”

This focus on the next movie may have also taken out some instances of missed potential. With such a new character, more twists and changes could have played out rather than staying in a such a comfortable plot.

As a film, it was another solid addition to the Marvel franchise. As an origin story, it was rich and human, fueled by integrity and growth. This film also puts the main character in many forms of her own — she is demonstrated as not only a hero, but a friend, mentee and mentor. Like all of us, there are those who inspire us, and those we inspire as well.

So welcome, Captain Marvel. Now that we know your story, the endgame can begin. 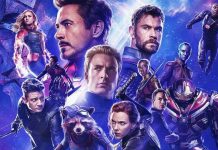 REVIEW: ‘Avengers: Endgame’ is an absolute triumph 11 years in the making